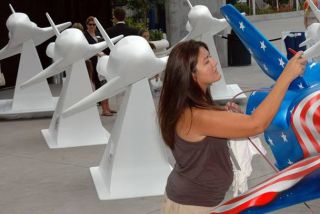 Shuttles on parade: Over 100 fiberglass orbiters will be painted to raise funds for college students.
(Image: © Karl Ronstrom/First Photo)

Over 100space shuttles will land this November at the Kennedy Space Center, though NASA can take credit for only one. The additional orbiters will be courtesy theAstronaut Scholarship Foundation, which on Thursday formally announced the"Shuttles Orbiting the Space Coast" program, a public art exhibitorganized to celebrate the first half-century of U.S. space exploration.

"It'sappropriate to celebrate NASA's 50th anniversary by showcasing its longestrunning manned space vehicle — the space shuttle," said Linn LeBlanc, theFoundation's Executive Director, in an e-mail to collectSPACE.com."There were discussions with several of our astronaut members, if thevehicle should be shown in flight or fully-stacked, but it was unanimouslydecided to show theorbiter in all its glory — in flight!"

LeBlanc, aswell as several of the Foundation's astronaut board members and representativesof Florida's Space Coast Office of Tourism were at KennedySpace Center's Visitor Complex yesterday to reveal the 8-foot tall shuttlestatues, including the first to be painted, by Quiet Flight surfboard artistGina Razzano. Her design for the formerly all-white orbiter incorporated the U.S. flag, an American bald eagle and the Moon.

Otherartists can apply through June 30 to take part in the program and if selectedwill be given six weeks to paint their design and a $1,000 honorarium inreturn. Beginning on November 7 for one month, the 100 decorated shuttles willbe displayed at the visitor complex for public viewing.

Designed asa fundraiser for the Foundation, which offers scholarships to college studentsexcelling in science and engineering degrees, the shuttles are to be sponsoredby companies and organizations in return for the opportunity to display themelsewhere around Brevard County and the nation. Sponsorship levels range from$2,800 to $20,000.

FromDecember through June 2009, the fiberglass orbiters will go on display atsponsors' chosen locations. For the higher level participants, astronauts willaccompany their shuttle statues for an unveiling ceremony.

Then inJuly of next year, the shuttles will return to KSC for one last public displaybefore they go their separate ways.

"Someof the space shuttle statues will be donated to schools and public venues,while others will be auctioned for charity," shared LeBlanc, who addedthat all proceeds will benefit the Foundation. A "Final Destination"dinner will be held in August 2009 to sell the remaining statues.

"Littledid we know how all-encompassing it would be — from developing a mold tomanufacturing the statues — it's been a magnificent ride and we are so excitedto be a part of Brevard County's first ever statue art program," saidLeBlanc.