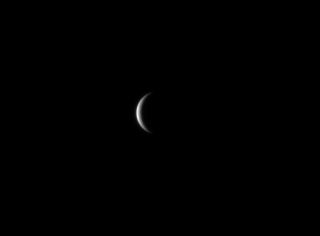 On Jan. 9, 2008, the MESSENGER spacecraft snapped one of its first images of Mercury at a distance of about 2.7 million kilometers (1.7 million miles) from the planet.
(Image: © NASA/JHUAPL/Carnegie Institute of Washington.)

A NASAspacecraft has a date with Mercury next week for a flyby that will return thefirst detailed views of the small planet in more than 30 years.

TheMESSENGER probe will skim just 124 miles (200 km) above Mercury?s unchartedhemisphere during its closest pass at 2:04 p.m. EST (1904 GMT) on Monday,marking the first of ultimately three flybys to bleed off speed and enter orbitaround the planet.

?Ourspacecraft is lined up and ready to go,? said Marilyn Lindstrom, NASA?sMESSENGER program scientist, in a Thursday briefing, adding that the probe hasalready returned its first images of its target. ?Mercury, here comesMESSENGER.?

Launchedin August 2004, MESSENGER — short for the bulky moniker MErcury Surface,Space ENvironment, GEochemistry, and Ranging — is the first spacecraft to visitMercury since NASA?s Mariner 10 probe swung past the planet three times between1974 and 1975. But unlike its predecessor, MESSENGER will rendezvous withMercury four times, making three flybys before ultimately entering orbit in2011 for a one-year science campaign.

The $446million mission is aimed at probing the secrets of Mercury, ranging from itswispy thin atmosphere to an unusually dense interior. The mission will alsogenerate the first maps of some 55 percent of the planet?s rocky surface thatMariner 10 missed during its threeplanetary passes.

?More thanhalf the planet?s never been seen before,? said MESSENGER principalinvestigator Sean Solomon, of the Carnegie Institution of Washington. ?Thatwill change on Monday.?

MESSENGER?sMercury flyby actually begins in earnest around midday Sunday, when the probewill turn itself away from Earth to bring its science instruments to bear on itsplanetary target. The spacecraft will snap more than 1,200 photographs of Mercuryduring its first rendezvous while a protective sunshade keeps its cameras andother instruments at room temperature. The sun-facing side of the shade mayreach temperatures of 600 degrees Fahrenheit (315 degrees Celsius) or so,researchers said.

For 14minutes, the probe?s power-generating solar panels will be in Mercury?s shadow,forcing the spacecraft to briefly rely solely on its batteries, said EricFinnegan, MESSENGER systems engineer. The probe will use the gravitational pullof Mercury to slow its speed by about 5,000 miles per hour (8,046 kph) duringthe flyby, he added.

MESSENGERis expected to reestablish contact with Earth about midday on Tuesday, 22 hoursafter the closest Mercury approach, and then beam back images to its eagerscience team. The probe has already flownpast Earth once and Venus twice as it spiraled down the solar system on the4.9 billion-mile (7.9 billion-kilometer) trek to Mercury.

?Now, we?re just a few days away from our first glimpse ofMercury in 33 years,? said Solomon. ?It is an understatement to say that thescience team is extremely excited.?