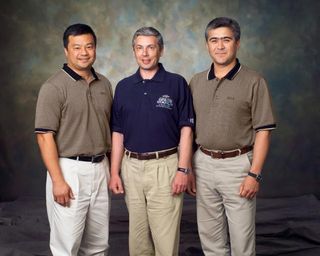 The next three humans bound for the International Space Station (ISS) are spending their final hours on Earth before launching into space tonight atop a Soyuz rocket.

NASA astronaut Leroy Chiao and Russian cosmonaut Salizhan Sharipov, the two-person crew of ISS Expedition 10, and one visitor are set to launch toward the space station at 11:06 p.m. EDT (0306 Oct. 14 GMT) from Baikonur Cosmodrome in Kazakhstan.

"This is just a historic place here at Baikonur," Chiao said on NASA TV. "It's great to be a part of it."

Russian ground crews rolled out Expedition 10's Soyuz rocket and spacecraft on a rail car early Oct. 12, hoisting it into the vertical launch position and began preparing it for flight.

While Chiao and Sharipov are both spaceflight veterans, tonight's launch will mark the first long-duration mission for the two men. The Expedition 10 crew will spend about six months aboard the ISS, with Chiao serving as NASA science officer and mission commander. Sharipov will command the Soyuz taxi trip to the space station and serve as the ISS flight engineer.

Yuri Shargin, a Russian Space Forces test cosmonaut making his first spaceflight, will also ride up to the space station with Expedition 10 for a brief 10-day stay to conduct experiments.

During their mission, the Expedition 10 crew will conduct two spacewalks and perform maintenance and science experiments aboard the space station. Chiao has already performed four spacewalks in his astronaut career, logging more than 26 hours during extravehicular activities (EVAs). But for Sharipov, the Expedition 10 spacewalks will be his first forays into the vacuum of space.

"We have a huge flight program for this mission," Sharipov said. "We will probably be very busy."

Following tonight's launch, the Expedition 10 crew and Shargin will spend about two days in transit before docking with the ISS in the early morning hours of Oct. 16.

The astronauts then plan to relieve the current space station crew, Expedition 9 commander Gennady Padalka and flight engineer Michael Fincke, which has worked aboard the ISS since April 21. Padalka and Fincke are scheduled return to Earth with Shargin on Oct. 23.