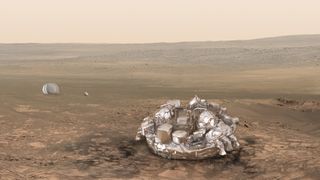 This image is an artist's impression of the Schiaparelli spacecraft on the surface of Mars.
(Image: © ESA/ATG medialab)

Ready for descent — deploy thrusters! The Schiaparelli spacecraft, part of the European Space Agency's (ESA) ExoMars mission to Mars, has received its landing commands for its expected Oct. 19 touchdown on the Red Planet, and a new video shows how the spacecraft will descend.

The new video details the spacecraft's landing commands, which include discharging the front and back aeroshells and deploying the craft's descent sensors, braking parachute and thrusters for a controlled landing. [Gallery: Europe's ExoMars Missions in Pictures]

The Schiaparelli spacecraft is set to land in Mars' Meridiani Planum region, close to the planet's equator. It will enter the Martian atmosphere at about 13,000 mph (21,000 km/h) and will have 6 minutes to brake to a safe speed for landing, ESA officials said in a statement.

To ensure the challenging descent goes according to plan, the lander's sensors will monitor its height above the Martian surface, starting at 4 miles (7 kilometers). When the spacecraft is about 6.5 feet (2 meters) above the surface, it will hover for a moment, cut its thrusters and fall freely to the ground, as shown in the video.

The uploading of the landing commands to ESA's ExoMars spacecraft marked a major milestone in preparing Schiaparelli for its touchdown on Mars. The commands were uploaded in two sets — one on Oct. 3 and another on Oct. 7.

Once safely on the ground, Schiaparelli will study Mars' wind speed and direction, humidity, pressure, air temperature and more. Then, the spacecraft's measurements will be sent to the Trace Gas Orbiter above. The main goal of this mission is to pave the way for the life-hunting ExoMars rover, scheduled to launch in 2020.

Editor's note: This article has been updated to reflect that as of May 2016, the next ExoMars mission has been moved to 2020 from 2018.