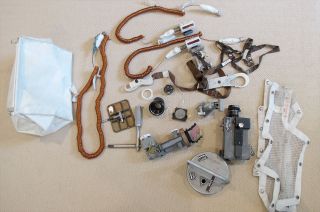 Found only after this death in 2012, Neil Armstrong had hidden in his closet the Apollo 11 "McDivitt purse" (at left) and its contents of flown-to-the-moon lunar module parts.
(Image: © Carol Armstrong/ALSJ)

Neil Armstrong had a secret stash of moon landing mementos.

The first man to walk on the moon kept a bag full of small parts from the lunar module "Eagle" that he and his Apollo 11 crewmate Buzz Aldrin famously piloted to a landing at Tranquility Base on July 20, 1969. The stowage bag was discovered by Armstrong's widow after he died in 2012.

"I received an email from Carol Armstrong that she had located in one of Neil's closets a white cloth bag filled with assorted small items that looked like they may have come from a spacecraft," Allan Needell, the Apollo curator at the National Air and Space Museum in Washington, DC, wrote in a blog published on Friday (Feb. 6). "Needless to say, for a curator of a collection of space artifacts, it is hard to imagine anything more exciting." [Neil Armstrong: An Astronaut Icon (Photos)]

The bag, itself flown to the moon, was referred to as the "McDivitt purse," after the Apollo 9 astronaut whose idea it was to include aboard the spacecraft.

Its contents, identified by Needell and the team behind the Apollo Lunar Surface Journal, included Armstrong's waist tether, utility lights and their brackets, equipment netting, an emergency wrench, the optical sight that was mounted above Armstrong's window and the 16mm data acquisition camera (DAC) that recorded the now iconic footage of the lander's final approach and Armstrong's descent down the ladder to take his "small step" onto the moon.

"The 16mm DAC, given the images that it captured, ranks as enormously important," Needell told collectSPACE.com. He noted though, that all of the items have added significance given their connection to Armstrong.

For whatever reason, Neil Armstrong seemingly kept the bag a secret for more than four decades. Even when questioned about mementos by his authorized biographer, Armstrong made no mention of the historic artifacts that were tucked away in his closet.

To be clear, the bag was not something Armstrong snuck home from the moon. After returning to lunar orbit, the bag and its contents were moved from Eagle to the command module "Columbia" before the lander was directed to crash back to the surface. Had the purse remained aboard, it too would have been destroyed.

Armstrong mentioned the purse to command module pilot Michael Collins as it was being transferred from one craft to the other.

"That [is] just a bunch of trash that we want to take back — LM parts, odds and ends," Armstrong said.

Later, Collins called Mission Control to note where the bag was being placed for the trip home and about how much it weighed.

It is not known how the purse came to be in Armstrong's possession after the mission, but it wasn't unusual for the astronauts to retain small spent parts of their capsules as souvenirs. In September 2012, one month after Armstrong died, President Barack Obama signed into law a bill that confirmed the Mercury, Gemini and Apollo astronauts had legal title their mementos.

For now, the purse and its contents are on extended loan from the Armstrong estate to the Smithsonian, though the intention is to eventually donate them to the museum. In addition to the McDivitt purse, the family has also offered an extensive collection of Armstrong's personal items and memorabilia.

Two of the artifacts, the data camera and waist tether, are already on display at the National Air and Space Museum as part of the new exhibition, "Outside the Spacecraft: 50 Years of Extra-Vehicular Activity," which is open through June. The tether was designed to be used in the case of an emergency spacewalk but instead Armstrong used it to suspend his legs while trying to rest inside the lander (a determination that the Apollo Lunar Surface Journal team made by inspecting the rediscovered artifact).

Eventually, the Armstrong purse and many, if not all of its contents may be put on display as part of the museum's planned renovation of its Apollo-dedicated gallery.

Click through to collectSPACE.com for a gallery of Neil Armstrong's Apollo 11 flown-to-the-moon mementos.