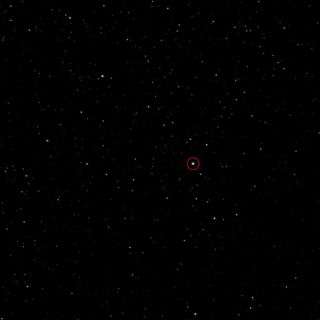 The comet targeted by a European spacecraft has calmed considerably, just as the probe's chase enters the home stretch.

Comet 67P/Churyumov-Gerasimenko, with which the European Space Agency's Rosetta probe will rendezvous in early August, sported a big dust cloud around its core in April and May. But photos taken by Rosetta's scientific camera on June 4 show no signs of such activity, and other observations reveal that the comet's brightness has dropped off as well, researchers said.

"The comet is now almost within our reach — and teaching us to expect the unexpected," the camera's principal investigator, Holger Sierks of the Max Planck Institute for Solar System Research in Germany, said in a statement. "After its onset of activity at the end of April, our images are currently showing a comet back at rest." [Photos: Europe's Rosetta Comet Mission in Pictures]

Comets tend to brighten and increase in activity when they approach the sun and warm up, as Comet 67P/Churyumov-Gerasimenko is doing now. But the icy objects are notoriously unpredictable, as 67P's current behavior demonstrates.

Rosetta lauched in March 2004, beginning a long and looping trip to Comet 67P/Churyumov-Gerasimenko, which is about 2.5 miles (4 km) wide. Researchers woke the probe up this past January to prepare it for the upcoming rendezvous, ending a record 957 days of deep-space hibernation.

Rosetta will meet up with 67P/Churyumov-Gerasimenko in early August, then drop a lander called Philae onto the comet in November. If all goes according to plan, Philae will capture the first-ever images from the surface of a comet and drill into 67P to collect samples, which will reveal a great deal about the comet's composition.

The mission should give scientists an unprecedented up-close look at a comet and help them understand how the icy bodies change as they zoom close to the sun, researchers said.

The data are already pouring in, as Rosetta's science instruments are back in action after the probe's long hibernation.

"It's great to have started regularly receiving science data, especially after a long, 10-year journey towards our destination," said Matt Taylor, the European Space Agency's Rosetta project scientist. "The variable activity of the comet shows it definitely has personality, which makes us all the more eager to get there to learn just how it ticks."

The Rosetta mission, whose total cost is 1.3 billion euros ($1.77 billion at current exchange rates), is slated to end in December 2015.