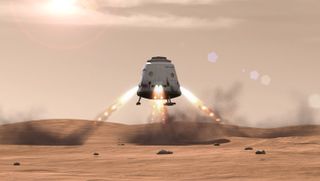 SpaceX's Dragon capsule – now in use to resupply the International Space Station – could be modified to perform a Mars sample-return mission, researchers say.
(Image: © SpaceX)

Scientists have blueprinted a low-cost Mars sample-return mission that would use a souped-up Dragon capsule from the private spacefligth company SpaceX and the firm's planned Falcon Heavy rocket to get to the Red Planet by the early 2020s.

The new study demonstrates the viability of the entry, descent and landing of the unmanned Dragon space capsule at Mars. Moreover, the spacecraft's descent technique would help set the stage for future human missions to the Red Planet, researchers said.

The idea is to leverage emerging commercial capabilities to achieve Mars sample-return (MSR) without breaking the bank, perhaps in 2022. Most scientists regard a sample-return trip as a "Holy Grail" mission — the best way to look for signs of past or present life on the Red Planet. [See more photos of a potental Red Dragon mission to Mars with SpaceX gear]

For the last few years, more than a dozen experts engaged in the appraisal, which was undertaken as an internal study at NASA's Ames Research Center in Moffett Field, Calif. They detailed the results at the Institute of Electrical and Electronics Engineers (IEEE) 2014 Aerospace Conference, held March 1-8 in Big Sky, Mont.

Scientists at NASA Ames have long been interested in drilling deeply into the subsurface environment of Mars, hoping to drill down 6.5 feet (2 meters) or more, said Lawrence Lemke, a senior engineer in the Mission Design Division at Ames.

Such digging capability would enable investigation of the habitability of that zone for past or existing Mars life, Lemke said.

Lemke contributed to the sample-return study, specializing in entry, descent and landing of a Space Exploration Technologies (SpaceX) Dragon capsule on Mars.

Dragon currently serves as a commercial cargo spacecraft, delivering supplies and scientific experiments to the International Space Station for NASA. Under a $1.6 billion deal with the space agency, Dragon will make 12 unmanned supply runs to the orbiting lab, two of which the company has already completed.

"Initially, we were skeptical," Lemke said. "The history of spaceflight is full of suggestions to utilize a spacecraft designed for operation in the near-Earth environment for operation in a deep-space environment. It usually turns out to be a terrible idea after you dig into the engineering details, because so many modifications are often required that it's better to just start with a clean-sheet design."

The study group spent a couple of years reviewing the engineering problem. They concluded that a minimally modified Dragon capsule — dubbed "Red Dragon" — could indeed successfully perform an all-propulsive entry, descent and landing on Mars "without violating the laws of physics," Lemke said.

The Red Dragon capsule is customized to carry the gear needed to return samples gathered on Mars, including a Mars Ascent Vehicle (MAV); an Earth Return Vehicle (ERV); and hardware to transfer to the ERV a sample collected in a previously landed rover mission, such as NASA’s planned Mars 2020 rover. [Images: NASA's 2020 Mars Rover]

At this time, NASA has made no firm plans to execute any type of sample-return mission. But agency officials want the Mars 2020 rover to collect and cache samples during its time on the Red Planet.

In the Red Dragon study, the spacecraft would make a direct entry into the atmosphere of Mars. It would descend to the Red Planet's surface without a parachute system, using retro propulsion for a precision touchdown. SuperDraco rocket engines would provide this retro propulsion. SpaceX is currently testing these powerful engines for its launch-abort system on the Dragon spacecraft.

The study findings suggest that, at the upper limits of its capability, a Red Dragon could land roughly 2 metric tons of useful payload on Mars. That’s two times more mass than any craft has ever landed on the Red Planet. (The current record was set when a rocket-powered "sky crane" lowered NASA's 1-ton Curiosity rover to the Martian surface in August 2012.)

In another plus, Lemke added, the Red Dragon capsule has several times the volume of the Viking heritage entry vehicle from the 1970s.

"This combination of features led us to speculate that it might be possible to land enough mass and volume with a Red Dragon to enable a Mars sample-return mission," Lemke said.

In addition, the mission would not require the transfer of samples from one vehicle to another in Mars orbit before making the trek to Earth, he said.

"This potentially lowers the risk and cost of a sample-return mission," Lemke said.

As currently envisioned, the sample-toting Red Dragon return vehicle would blast off the Martian surface (with the aid of the MAV) and head directly for Earth.

A study scenario sees a later mission, using a Dragon and launched by a Falcon Heavy, performing a rendezvous with the return vehicle in high Earth orbit. The mission would then retrieve the sample container and break the chain of contact with Mars by transferring the sample into a sterile and secure container.

"This work shows that emerging commercial capabilities can be effectively integrated into a mission to achieve an important planetary science objective," said Andrew Gonzales, a senior systems engineer in the NASA Ames Mission Design Division. He led the look into the overall Mars sample-return architecture.

"One of our top-level objectives was to critically examine options for a Mars sample-return with fewer elements," Gonzales told Space.com.

Gonzales said the Red Dragon study shows that a MSR mission in the preferred 2022 opportunity that retrieves previously collected samples — perhaps those gathered by NASA's Mars 2020 rover — is feasible. This is made possible by the use of emerging commercial technologies integrated with other types of techniques derived from traditional and new sources, he said.

"The significance of the work is that it opens the door to the efficient achievement of an important planetary science objective at a lower complexity level and, by extension, at potentially lower cost than previously considered," Gonzales said.

Both Lemke and Gonzales stressed that NASA Ames performed the Red Dragon work internally, using information in the public domain and without the assistance of any commercial organization.

Leonard David has been reporting on the space industry for more than five decades. He is former director of research for the National Commission on Space and is co-author of Buzz Aldrin's new book "Mission to Mars – My Vision for Space Exploration" published by National Geographic. Follow us @Spacedotcom, Facebook or Google+. Originally published on Space.com.