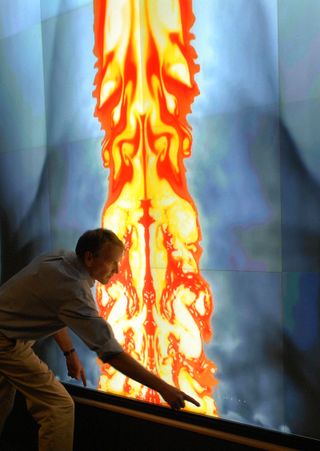 Supercomputer simulation shows details of a fireball that might be expected from an asteroid exploding in Earth's atmosphere. A team led by Sandia National Laboratories researcher Mark Boslough devised the simulation.
(Image: © Randy Montoya/Sandia)

DENVER – As researchers recover more leftover pieces from the space rock that detonated earlier this year near the Russian city of Chelyabinsk, the event is helping to flag a worrisome finding: Scientists have misjudged the frequency of large airbursts.

Computer simulations also imply that such airbursts cause more damage than nuclear explosions of the same yield, which are typically used as an analogue to ballpark impact risk.

The meteor explosion over Chelyabinsk gives the bottom-line message that the risk from airbursts is greater than previously thought. [Meteor Streaks Over Russia, Explodes (Photos)]

Mark Boslough, a physicist at Sandia National Laboratories in New Mexico, broached the implications of the Chelyabinsk airburst event on Oct. 7 here at the American Astronomical Society's 2013 Division for Planetary Sciences meeting.

According to Boslough, when you add the Chelyabinsk incident to the 1908 Tunguska explosion over Siberia — along with a 1963 bolide blast near the Prince Edward Islands off the coast of South Africa — the data suggest that the incoming rate of small space rocks is actually much higher than asteroid experts have assumed based on astronomical observations.

That Prince Edward Islands event was a 1.1-megaton explosion picked up by a global network of infrasound sensors, but not apparently seen by any observers.

"These three data points together suggest that maybe we have underestimated the population," of smaller sized objects that can create air bursts, Boslough said. "We think the airburst hazard is greater than previously thought."

The Feb. 15, 2013, explosion of a previously undetected asteroid about 25 miles (40 kilometers) from the Russian city of Chelyabinsk led to many injuries and widespread blast damage. But it has also spurred a wealth of data helping scientists to gauge the object's size, angle of entry and other specifics, Boslough said.

A "Chelyabinsk consortium" has been hard at work to better discern the varied characteristics of the fireball and the subsequent damage, he said.

The best estimate places the explosive yield of the space rock at 400 to 500 kilotons, Boslough said, making Chelyabinsk the most powerful such event observed since Tunguska, which is pegged at 3 to 5 megatons. (There are 1,000 kilotons in a megaton.)

The Chelyabinsk space intruder came in mostly from the east at 9:20 a.m. local time in Russia, bursting apart close to 19 miles (30 km) above the ground.

Pre-entry, the object had a diameter of roughly 65 feet (20 meters), with a mass of approximately 12,000 tons, Boslough said. It came in at an 18-degree angle, "a glancing blow," spreading its energy sideways and at an angle, which generated less damage on the ground, he said. Still, the outburst broke windows over several thousand square kilometers.

Out of the sun

Thanks to the work of colleague Peter Brown, a physics professor at the University of Western Ontario in Canada, Boslough said over 500 videos of the Chelyabinsk fireball have been collected, some of those no longer available via the Internet.

Boslough traveled to Chelyabinsk, where he performed calibrations of dashcam videos to help pinpoint the altitude and coordinates of the explosion.

Roughly 1,500 people were injured, "almost all by flying glass," due to a powerful, post-explosion shockwave, he said.

On one hand, Boslough said that the old Cold War practice of "duck and cover" during a nuclear bomb drill is a bit quaint, "but it turns out that it would be the right thing to do" for the Chelyabinsk meteor.

"If you're not at ground zero, the way to keep yourself from getting hurt from a large explosion in the atmosphere is to stay away from windows," Boslough said.

But even armed with that fact, he admitted that scientific curiosity would assuredly have driven him for a look-see out the window.

"I probably know as much about airburst as anybody," Boslough said, "and I'd probably have my face pressed against the window, and as soon as the blast died down, I would have gone 'Oh, yeah.'"

Still, if scientists had discovered this asteroid before it struck, be it five months or even a week in advance, it would have been wise to send out a call for people to stay away from windows, Boslough said.

In an October 1 online version of Acta Astronautica, a journal sponsored by the International Academy of Astronautics, Boslough has written about airburst warning and response, concluding that it is "virtually certain" that the next destructive Near Earth Object (NEO) event will be an airburst.

"Because early warning and civil defense will almost certainly be needed long before the first deflection is ever required, the credibility of the planetary defense community and its recommendations will be put to its first serious test by an airburst," Boslough said.

In his Acta Astronautica paper, Boslough has proposed an "airburst warning scale" to assist decision makers.

Also observing the Chelyabinsk episode, but from space, were U.S. government sensors. They, too, caught the affair, with that data released to the scientific community.

"If you compare some of these numbers to our estimates, they are different. It is worthwhile starting to consider these sorts of events as ground truth," Boslough told the DPS gathering.

Boslough underscored a concern voiced to Congress several years ago by Pete Worden, then deputy director for operations at the U.S. Space Command, now director of the NASA Ames Research Center near Silicon Valley, Calif. One of the largest potential threats associated with an airburst is the risk that it could be misunderstood as a preemptive attack launched by one country at another, Worden had said.

"I always thought that was a little exaggerated," Boslough said, until he watched a number of videos taken of the Chelyabinsk blast.

"Say that this had happened on an overcast day, where nobody actually saw the streak across the sky. Then you see smoke, hear a large explosion and a lot of things that sound like artillery fire," Boslough said. Then imagine it's over a place that's already politically unstable, he said.

"One of the biggest threats could be that this might lead to a counterattack of somebody because something was misconstrued," Boslough said.