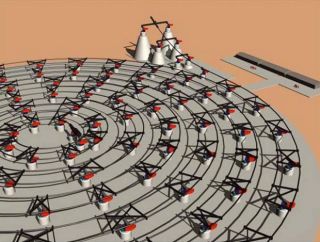 A new kind of reusable launch system could make hurling satellites, spacecraft and other payloads into space much less expensive.

A launcher that mimics the motions of the classical slingshot is currently under development by HyperV Technologies Corporation. Called the Slingatron, the device will utilize the centrifugal force generated by spiral motion to launch objects into space.

A classical sling maintains a constant string length as its user whirls it faster and faster. The Slingatron is styled around a modified version with a constantly-extending string, but replaces the fragile string with a steel track. As the payload moves around the track, it increases speed until it reaches about 4 miles per second (7 km/s), fast enough to hurl it into low-Earth orbit.

The recent discussions on mining asteroids and manned missions to Mars bring with them the problems of launching sufficient supplies into space. Each increase in weight brings with it a significant increase in cost, making the possibility more daunting.

According to Adam Crowl of Icarus Interstellar, an international nonprofit group that aims to achieve interstellar flight by 2100, a number of designers have tackled the problem of sending bulk materials into orbit alone.

In reference to the Slingatron, Crowl, who is not involved in the project, said, "Such a launcher would be useful for all space missions requiring large amounts of materials in bulk, but able to be split up."

Objects launched by the Slingatron would reach high velocities, up to 60,000 times the gravitational force experienced by standing on the Earth's surface. As such, fragile objects (and people) would not be able to travel by Slingatron, and special g-hardened satellites would need to be developed.

But material launched by the Slingatron could be sent up rapidly. Faranetta and his team calculate that a single machine could make many thousands of launches per year.

"A Slingatron could lower the delivery cost of bulk materials to orbit — so long as they can be cheaply, quickly, and usefully gathered once there," Crowl said. [Images: Amazing Visions of Interstellar Space Travel]

With clever robotics and guidance systems, he thinks that it might make the concept of assembling spacecraft in orbit a more reasonable and attractive option for mission designers.

"Multi-part spacecraft are considered unattractive by present mission designers because launches get delayed, and so completing things to a schedule can't be guaranteed," Crowl said. "A Slingatron would allow rapid, frequent launches of smaller part, making on-orbit assembly a more reliable option."

Faranetta said that the Slingatron is a largely reusable space transportation system, with only a few components such as kickmotors that would need to be replaced over time. It doesn't require any future technology, but can be built with materials readily available today.

"We believe that a large-scale orbital launch Slingatron has the potential to be far cheaper per pound, provided that a Slingatron is used to support missions which require a high number of annual launches," Faranetta said.

In addition to on-orbit construction, HyperV Technologies foresees the Slingatron being helpful with the launch of satellite-based arrays, on-orbit refueling of launch vehicle stages, the delivery of radiation shielding for manned deep-space missions, the resupply of manned platforms, and the potential to provide planetary defenses by deflecting asteroids headed toward Earth.

The ability to launch a wealth of objects rapidly doesn't come without potential concerns.

"Irresponsibly launching too many 'throwaway' payloads into space would add to the space junk problem," Crowl said.

"But the Slingatron might encourage creative recycling of space junk, once on-orbit manufacturing is a growing concern, so it might help solve the problem rather than adding to it."

Derek Tidman first conceived of the idea in late 1994, after reading about experiments that used a two-stage light gas gun to accelerate a heavy projectile. He authored a textbook and published a number of studies on the Slingatron.

Two prototypes, the Mark I and Mark II, were constructed, and the company seeks to build a third, larger demonstration model, which they hope to use to increase interest in the final project. The company's Kickstarter page sought funding over the summer, but came in short of the its goal. Undeterred, HyperV has moved on to search for private investment capital for the Slingatron.

"The Slingatron is a logical outgrowth from the decades of research conducted by both Dr. Derek Tidman and Dr. Douglas Witherspoon [President and Chief Scientist of HyperV Technologies] in the area of hypervelocity launch," Faranetta said.

The two have worked on a number of projects that launch either plasma or a projectile at hypervelocity.

"A Slingatron's services need to be marketed aggressively to space mission planners, and more creative uses of small but frequent payloads needs to be on the mental horizon of potential space-entrepreneurs," Crowl said. "A successful demonstration would enable that, but so would a friendly regulatory environment and more real, lasting openness to new ideas in the world's space bureaucracies that are still the major customers."