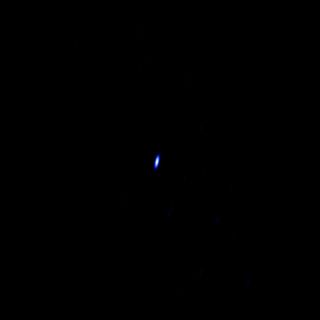 The Very Long Baseline Array (VLBA), a network of radio telescopes operated by the National Radio Astronomy Observatory, spotted the signal of NASA's Voyager 1 spacecraft from 11.5 billion miles (18.5 billion kilometers) away. The image was taken on Feb. 21, 2013.
(Image: © NRAO/AUI/NSF)

The space agency unveiled the amazing image Voyager 1's radio signal glow as seen by an array of radio telescopes on Earth earliier this week to celebrate Voyager 1's arrival in its new interstellar frontier.

Researchers confirmed Thursday (Sept. 12) that Voyager 1 is officially in interstellar space. The spacecraft, which launched in 1977, became the first ever human-made object to leave our cosmic neighborhood and enter the space between stars. It likely did so on or around Aug. 25, 2012. [Voyager 1 in Interstellar Space: Complete Coverage]

Scientists can't "see" our first interstellar ambassador in the visible spectrum, but they can detect Voyager 1's signal in radio light.

The 36-year-old spacecraft's communications technology is lacking by today's standards. A smartphone has thousands of times more memory than Voyager 1 and the space probe's main transmitter radiates just 22 watts, about the same amount of power as a typical ham radio or a refrigerator light bulb, NASA said. But compared to many natural objects probed by radio telescopes, Voyager 1's signal is actually quite bright.

"They were able to see a blue speck," Suzanne Dodd, Voyager's project manager at NASA's Jet Propulsion Laboratory, Pasadena, Calif., said during a news conference Thursday. "And this image represents the Voyager radio signal as seen by the world's most sensitive ground-based telescope."

"It's just a speck in amongst a sea of darkness," Dodd added.

At the time of the observation, Voyager 1 was 11.5 billion miles (18.5 billion kilometers) away from Earth.

The image, which looks slightly oblong because of the array's configuration, is about 0.5 arcseconds on a side, according to NASA. One arcsecond — a unit of size for objects in the night sky — would describe the size of a penny as seen from 2.5 miles (4 kilometers) away. For comparison, the full moon is about 1,800 arcseconds across.

After launching more than three decades ago, Voyager 1 and its twin spacecraft Voyager 2 took a "grand tour" of the solar system, giving us the first up-close glimpse of Jupiter, Uranus and Neptune and several the moons of those outer planets.