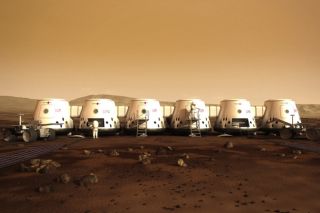 Martian wannabes dust off those resumes: The application deadline for a one-way mission to Mars is almost here.

While the prospect is off-putting to many, it's also the dream of a lifetime to some; more than 165,000 people have applied to join the manned Martian colony effort envisioned by the non-profit Mars One Foundation. But the foundation is only accepting applications until Aug. 31.

After Aug. 31, Mars One officials will begin winnowing down the field of applicants — the only requirement to apply is to be over age 18 — to identify those most likely to thrive on the nine-month journey to the Red Planet, and in the settlement to be established upon arrival. [Mars One’s Red Planet Colony Project (Gallery)]

"It's easily assumed that Mars One is only looking for pilots and engineers," Mars One chief medical officer Norbert Kraft said in a statement. "Don't disqualify yourself too easily. If you wish to be a Mars pioneer despite of the risks and challenges that come with this job, you are already more qualified than most people on this planet. It is most important that you are healthy and have the right mindset."

"The cultural diversity of Mars One applicants reflects the international nature of this project and ultimately makes it humanity's mission to Mars," Bas Lansdorp, CEO and co-founder of Mars One, said in a statement.

Mars One plans to launch its first crew to the Red Planet in 2023. The team hopes to finance the huge cost of the operation in part through advertisement fees on a reality TV show following the astronaut selection process and the mission planning and training procedures. A new documentary, "One Way Astronaut," has already documented the early days of the application process for the ambitious Martian mission.

The 19-week Round 1 application window opened in April, and initially Mars One officials said their goal was to gather half a million applications.

Regional reviewers for Mars One plan to select 50-100 candidates in each of 300 geographic regions in the world to move on to the Round 2 stage of the application process.

After two more selection rounds ending in 2015, between 28 and 40 Mars colonist candidates will be selected to be employed by Mars One. They will then begin training for the private Mars mission. Following seven years of training, a public vote will select the first group to be sent to Mars from among these finalists, foundation officials have said.

You can apply for the Mars One mission here: http://www.mars-one.com/en/.