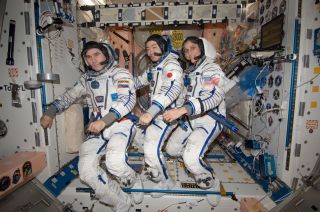 n the International Space Station's Unity node, NASA astronaut Sunita Williams, Expedition 33 commander; along with Japan Aerospace Exploration Agency astronaut Aki Hoshide (center) and Russian cosmonaut Yuri Malenchenko (left), both flight engineers, attired in their Russian Sokol launch and entry suits, take a moment for a photo as they prepare to perform the standard leak check in their spacecraft in preparation for their return to Earth on Nov. 18, 2012.
(Image: © NASA)

A veteran astronaut crew representing the United States, Russia and Japan is returning back to Earth aboard a Soyuz capsule today (Nov. 18) to wrap up a four-month mission to the International Space Station.

The Soyuz spacecraft undocked from the space station at 5:26 p.m. EST (2126 GMT) as both ships sailed 256 miles (412 kilometers) above northwestern China. The Soyuz is due to land on the Central Asian steppes of Kazakhstan at 8:53 p.m. EST (0153 Nov. 19 GMT) to return American astronaut Sunita Williams of NASA, Russian cosmonaut Yuri Malenchenko and Japanese astronaut Akihiko Hoshide to Earth after 127 days in space.

The trio will make a rare night landing when their Soyuz TMA-05M capsule lands in Kazakhstan. At landing time, it is expected to be a cold night with an hour to go before sunrise, NASA officials said. You can watch the Soyuz landing live here via SPACE.com's NASA TV feed.

"I think we've left this ship in good shape and I'm honored to hand it over to Kevin," Williams told Ford before presenting gifts to Expedition 34 crew in an emotional exchange. "As you can see, we have a great crew up her, us who are going home very shortly and the ones who are taking over. The ship's in good hands."

Williams, Malenchenko and Hoshide launched into orbit in mid-July, with Williams becoming the second female commander of the space station when she took charge earlier this year. Williams, an avid runner, became ran the first triathlon in space during the mission, which also featured three spacewalks and the first official cargo delivery by a robotic Dragon spacecraft built by the U.S. company SpaceX.

The Soyuz spacecraft ferrying Williams and her crewmates back to Earth is due to fire its rocket engine to leave orbit at 7:58 p.m. EST (0058 Nov. 19 GMT) and land in Kazakhstan just under one hour later. It will be the first night landing of a Soyuz spacecraft since the Expedition 12 mission in 2006, NASA officials said.

A fleet of eight helicopters carrying recovery teams and vehicles will be circling the Soyuz spacecraft's primary and backup landing zones in order to ensure a swift retrieval of the returning astronauts.

As Williams and her crew readapt to life on Earth, the Expedition 34 crew still on the space station will prepare for a busy holiday season in orbit. The astronaut and cosmonauts are expected to celebrate the U.S. Thanksgiving holiday on Thursday (Nov. 22) and prepare for the arrival of three new crewmembers in mid-December.

The International Space Station is the largest manmade structure in space. It was built by  five different space agencies representing the United States, Russia, Europe, Japan and Canada, with construction beginning in 1998. The $100 billion space station has been continuously occupied by a series of rotating astronaut crews since 2000.