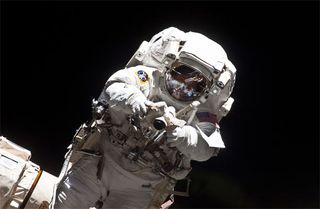 Thespacewalking crew of NASA's space shuttle Atlantis began the third and finalspacewalk of their mission early Friday to wrap up a battery upgrade servicecall on the solar arrays outside the International Space Station.

Itwill be the final spacewalk conducted by Atlantis astronauts while it is dockedat the station because this STS-132mission is expected to be the orbiter's last planned flight before theshuttle fleet's retirement.

Theshuttle Atlantis crew woke Friday morning at 1:50 a.m. EDT (0550 GMT). Thespacewalkers began their excursion ? called an extravehicular activity (EVA) inNASA parlance ? at 6:27 a.m. EDT (1027 GMT), and stay outside about 6 1/2hours. They will exit out of the station's Quest airlock.

Missionspecialists Garrett Reisman and Michael Good are following up two previousspacewalks on this mission to complete the job of installing new batteries onthe left-most edge of the station's backbone-like truss.

Goodand fellow mission specialist Stephen Bowen began the chore on Wednesday'sspacewalk, when they got ahead of schedule and installed four of six batteries,leaving only two more for this final excursion.

"Originallywe thought we'd have to perform three battery changes but because of theexcellent work the crew did yesterday in our secondspacewalk? that allows us an opportunity to get ahead," lead shuttleflight director Mike Sarafin said Thursday.

Thebatteries are ungainly, weighing about 375 pounds (170 kg) each. Thespacewalkers will remove new ones from a cargo carrier in the shuttle's payloadbay, and then swap them out with the aging units currently on the station.

Inaddition to the battery work, the spacewalkers will remove a robot arm toolcalled a grapple fixture from the shuttle's payload bay. For now, theastronauts will take it back inside the station with them; it will be installedduring a later spacewalk on the station's Russian Zarya module.

"Sowhen we repressurize and go back into station it won?t be just Garrett and I inthat airlock," Good said in a preflight interview. "We?ll have thisgreat big grapple fixture in there with us so hopefully there?ll be room foreverybody in there."

MissionControl has also planned a medley of various get-ahead tasks for Good andReisman to do that will help outfit the station for the future.

"OnEVA 3 it?s kind of a clean-up day," Good said. "It?s to geteverything done that we had hoped to get done on the whole mission, sowhatever?s left."

Thespacewalkers will install a hose for the ammonia coolant system on thestation's exterior, and replace some errant tools in outside toolboxes.

Missionspecialist Piers Sellers will help out from inside the orbiting lab byoperating the station's robotic arm.

"Weare all absolutely thrilled at how this mission is going so far," Atlantiscommander Kenneth Ham said Thursday. "We're just going to stay focused andhopefully get through the next few days."

Thecrew plans to undock from the space station on Sunday and land back at NASA'sKennedy Space Center in Cape Canaveral, Fla. on Wednesday, May 26.