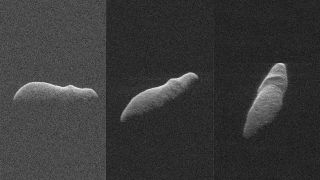 If only a hippopotamus will do this Christmas, Santa has the space rock for you.

A small asteroid will fly safely by Earth Saturday (Dec. 22) and according to the folks at NASA, it looks just like the mighty hippo in new radar images. The asteroid, called 2003 SD220, is also making its closest approach to Earth in more than 400 years and won't be any closer until 2070, NASA officials said. It last flew by Earth on Christmas Eve of 2015.

"Do you want a hippopotamus for Christmas?" officials with NASA's Jet Propulsion Laboratory wrote on Twitter Friday (Dec. 21). "You're in luck. Hippo-shaped #asteroid 2003 SD220 will fly safely past Earth on Saturday, Dec. 22, at a distance of ~1.8 million miles (~2.9 million km)." (If you're wondering about the Christmas-hippotomas connection, watch this adorable music video of "I Want a Hippopotamus for Christmas" as sung by a 10-year-old Gayla Peevey in 1953.)

The new radar images revealed that asteroid 2003 SD220 is nearly 1 mile long (1.6 kilometers) and has a shape "similar to that of the exposed portion of a hippopotamus wading in a river," JPL officials said in a statement. The asteroid's size and close flybys of Earth make it potentially hazardous asteroid to watch for NASA, but it poses no impact threat to our planet, agency officials said. [Potentially Dangerous Asteroids in Pictures]

The radar images were taken between Dec. 15 and Dec. 17 by scientists with NASA's JPL, Goldstone antenna in California, Arecibo Observatory in Puerto Rico and the National Science Foundation's Green Bank Telescope in West Virginia. The Goldstone and Arecibo instruments bounced microwave signals off the asteroid that were then picked up by the Green Bank Telescope to create detailed radar images of the rock's size and shape.

"The radar images achieve an unprecedented level of detail and are comparable to those obtained from a spacecraft flyby," said Lance Benner of JPL in Pasadena, California, lead scientist for the Goldstone observations, in the JPL statement. "The most conspicuous surface feature is a prominent ridge that appears to wrap partway around the asteroid near one end."

The ridge rises 330 feet (100 meters) above its surroundings, and the asteroid is pepperd with bright spots that may be reflections from boulders, Benner said. "The images also show a cluster of dark, circular features near the right edge that may be craters," he added.

The new observations are about 20 times more detailed than those taken in 2015, when asteroid 2003 SD220 last flew by Earth. At the time, it was much farther away than on its current visit, NASA officials said.

The new images also confirm key details about asteroid 2003 SD220, NASA added. They show that the asteroid rotates just once every 12 days - an oddly slow spin for a space rock. It also has a wobbly motion that NASA officials likened to a badly thrown football (or perhaps a meandering hippo?).

"Known as 'non-principal axis' rotation, it is uncommon among near-Earth asteroids, most of which spin about their shortest axis," NASA officials said of the asteroid's motion.