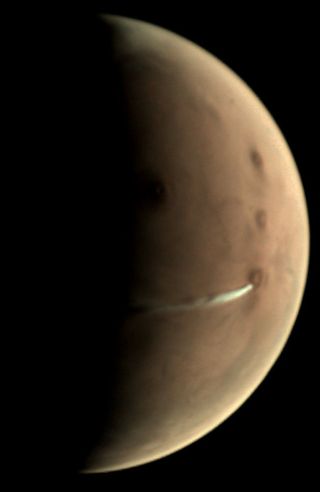 An instrument aboard the European Space Agency's Mars Express spacecraft captured this image of a strange cloud on the Red Planet on Oct. 10, 2018.
(Image: © ESA/GCP/UPV/EHU Bilbao, CC BY-SA 3.0 IGO)

For more than a month now, a European orbiter circling Mars has been watching a long, plume-like cloud on the Red Planet.

The cloud has remained in place over a mountain called Arsia Mons near the Martian equator since Sept. 13, according to a statement released by the European Space Agency (ESA). But that location is just a coincidence, the agency adds. No volcanic process is producing the cloud — the volcano hasn't been active in about 50 million years, scientists believe.

The same spacecraft, called Mars Express, and its predecessors have spotted similar clouds on at least three previous occasions, and those structures formed around the same time in the Martian year. And that's not a coincidence, the ESA wrote.

The cloud is full of water ice, the agency continued, created by air flow along the side of the volcano. This means the feature is what scientists call an orographic or lee cloud. That also happens to mean that the cloud changes over the course of the day as atmospheric patterns on Mars change.

Scientists watching the cloud have noticed that it grows over the course of the morning, stretching along the equator. It may also be affected by the dust still in the atmosphere from the massive dust storm that engulfed Mars earlier this year.