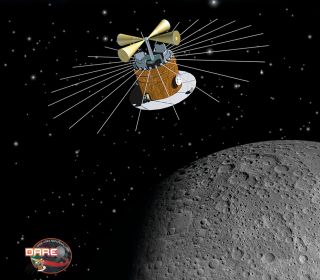 The Dark Ages Radio Explorer would orbit the moon, taking readings with a radio telescope while it was shielded from Earth in order to probe the universe's early "dark ages."
(Image: © University of Colorado)

A proposed spacecraft would orbit the moon, sheltering in its shadow to gaze uninterrupted into the early days of the universe.

The Dark Ages Radio Explorer (DARE) mission would dodge Earth's noisy, disruptive environment to peer back into the universe's dark ages and cosmic dawn — the mysterious epoch just as the first stars and galaxies began to shine — with a little help from the moon.

"The moon, in this case, is just a big blocking disk," said Jack Burns, director of the Lunar University Network for Astrophysics Research at University of Colorado, Boulder and DARE's principal investigator. [How the DARE Dark Ages Moon Orbiter Will Work (Infographic)]

"We've argued that this is a unique way, and may turn out to be effectively the only way, of probing these first stars and galaxies that occurred in our universe — that led to galaxies like the Milky Way, stars like our sun, several generations later," he told Space.com.

Research suggests the universe formed in the Big Bang about 13.8 billion years ago, and the earliest light astronomers can detect, called the cosmic microwave background (CMB), dates from about 400,000 years later.

But soon after that, until about 1 billion years after the Big Bang, the universe was filled with a haze of neutral hydrogen — atoms with one proton and one electron each. That haze muffled the signals of the first stars' formation so they are not detectable today.

Burns and his collaborators plan to measure the neutral hydrogen itself, which surrounded and was heated by the very first stars and galaxies, to learn about that long-ago epoch.

The signal neutral hydrogen gives off is easy to detect when it's relatively close by; researchers have measured its 21-centimeter-long wavelength (about 8 inches) since the 1950s to learn about the diffuse gas that lies between stars. But when the signal is coming from the universe's far reaches, things get more complicated: the farther away the source is, the more stretched out the signal gets, because the source is moving away from Earth faster and faster. That "redshift" effect means that, because the universe is expanding, light will always appear redder when it comes from farther away (which also means earlier in time).

With the time periods DARE is dealing with, and the distance the light has to travel, those easily measured 21 cm waves can get very stretched out — the researchers plan to look for wavelengths from 8.2 feet (2.5 meters) to 24.6 feet (7.5 m) long, Burns said. Plus, he added, they shine incredibly faintly.

This raises two main problems. First, the charged layer of Earth's atmosphere, the ionosphere, "wreaks havoc" with the radio waves that come through, Burns said, absorbing and refracting them until they're too difficult to interpret. And many of the wavelengths he's interested in run up against a major Earth emission — FM radio, which uses the same wavelengths of light and overwhelms the faint signal. [The Universe: Big Bang to Now in 10 Easy Steps]

"We've concluded that these observations are best done from a very quiet place that has no ionosphere," Burns said. "And in the local part of our solar system nearest the Earth, that would correspond to the far side of the moon."

DARE would take observations during the portion of its 2-hour orbit when the moon shields it from Earth's radio waves, while it's on the moon's far side. When shielded from the sun as well, the spacecraft could collect higher-quality data; the best possible time is during the full moon, DARE materials said.

Burns hopes to submit a proposal to NASA's Explorer program in December — if selected to do a concept study and chosen for flight after that, the mission could launch somewhere around 2021 or 2022, he said.

The DARE team has partnered with Ball Aerospace, which is also based in Boulder, to develop plans to repurpose one of the company's smaller spacecraft to deliver the probe to lunar orbit.

"One of the main differences between this mission and most other satellite missions is the lunar orbit," Lisa Hardaway, the lead for Ball Aerospace on the DARE spacecraft, told Space.com in an email. "We used a motor that acts as a third stage, similar to when Apollo was launched. There have been a few missions to the moon that have used similar techniques, but most of our launches are for Earth orbit, so this is anything but routine." A separate mission partner will be in charge of the rocket and booster, she added.

Once in place around the moon, isolated from Earth's noise, measuring the faint signals will still be a challenge, Burns said. For instance, radiation from the spacecraft itself can distort the sensitive measurements if it's not properly shielded. The mission will also need to rule out the much brighter "foreground" radiation in the Milky Way itself.

"The telescope and spacecraft have to work together to collect the needed data, yet be isolated from each other so that spacecraft signals do not interfere with instrument signals," Hardaway said. "To that end, instrument electronics are buried within the spacecraft except for those highly sensitive electronics that need to be directly with the antenna."

Other projects are in progress, on the ground, to look at slightly later periods in the universe's history with the same neutral-hydrogen signal. For instance, the proposed Hydrogen Epoch of Reionization Array, HERA, would look at the "reionization period," when ultraviolet light from newly forming stars destroyed the neutral hydrogen and eventually rendered the universe visible at high wavelengths again. Projects like HERA require similarly sensitive antennas to pick out the signals they're searching for.

"The biggest challenge is not unique to DARE," said HERA project leader Aaron Parsons, an astronomer at the University of California, Berkeley. "There's a lot of other stuff in the sky that's bright, that is emitting light at these frequencies. It's maybe 100,000 times brighter than the signal that we'd like to see in the early universe." [Amazing Photos from Giant Radio Telescope ALMA]

DARE makes some aspects of detecting faint signals easier by getting away from interference, and certain signals can only be detected from space, Parsons told Space.com, but designing precise-enough antennas will still be difficult.

In fact, Parsons said, strides made in ground-based radio telescopes could make missions like DARE more plausible in the long run.

"Once you've shown the science capabilities of [detecting the signal], then the stage will be really set for something like DARE, where you bring this out into space," he said.

For both DARE and ground-based radio telescope projects, neutral hydrogen is the key to seeing what the universe was like long ago — giving a perspective that no earlier astronomy has been able to give, the researchers said.

"It's only been in the last, let's say 30 years that we've been able to answer quantitative questions about cosmology; where our universe came from, what it was like long ago, how did we get to where we are, what's the ultimate fate of the universe," Parsons said, adding that this knowledge has all come from measuring a tiny snippet of the universe's early history, when the cosmic background radiation was emitted. "One little slice, and we've learned all this incredible stuff about cosmology."

Projects such as DARE and HERA would extend our sight into the vital moments after the universe went dark, and as it transitioned to being light again, Parsons said.

"Rather than just having this thin shell that we're learning from, we can be learning from the whole volume of the universe," he said. "And that's really incredible."