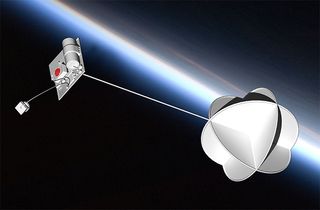 Artist’s impression of a ThumbSat in space.
(Image: © ThumbSat Inc.)

In the past decade, we've seen that mini-satellites can provide quite a bit of science. CubeSats are being used for applications ranging from Earth imaging, to simple communications, to science experiments. And in the coming years these small satellites (only a few inches across) are expected to fly to further-flung destinations such as Mars and one of Jupiter's moons, Europa.

While CubeSats are inexpensive enough for universities and small companies to access, a company called ThumbSat Inc. has a vision of even cheaper space exploration. As the name of the firm implies, a "ThumbSat" is controlled by a tiny circuit board and carries an experiment that is just 48 mm x 48 mm x 32 mm across at most and weighing around 25 grams (0.055lb). What's more, ThumbSat is willing to do more of the mission planning for you than a typical CubeSat, the company says.

"Before you even think about your experiment on a CubeSat, you have to buy a kit, put it together, apply for licenses to launch and transmit from space, find a launch and get together plenty of funding to do it.  If you choose the ThumbSat route, all you have to think about is the experiment, and we can help you a lot with that too," wrote Shaun Whitehead in an e-mail to Discovery News.

Whitehead is a British engineer who invented the ThumbSat idea and is also the founder of Scoutek Ltd., a robotics firm that builds components for extreme environments such as underwater and space.

NEWS: Cubesats to Hitchike on Next Mission to Mars

"In the future, it will get even better, we are planning to provide tools for you to build and fly your experiment virtually before you commit many resources to it … The main advantages of ThumbSat are timescale and cost — at least an order of magnitude less than a CubeSat mission," he added.

The ThumbSat idea first occurred to Whitehead while he was thinking of a cheap way to test "novel" materials for a lunar project in space. He felt that despite his contacts in the industry, there was no easy way to get the payload above Earth's atmosphere for cheap — especially considering it includes a process such as licensing and building the hardware.

"I realized that if we could set up an infrastructure that covered absolutely everything needed to do science in space on a tiny scale, it would leave people free to concentrate on the most important thing — the experiment," he wrote.

While the mission is cheap — about $20,000 US for an experiment — it will only last about eight to 10 weeks in orbit. Whitehead describes the mission as long enough to do some science, but short enough to carry just a tiny battery. The payload is designed to be in a low enough orbit to burn up harmlessly in the atmosphere shortly after finishing, to avoid becoming space junk.

And the first set of ThumbSats are launching soon, in February 2016, aboard a Rocket Lab Electron vehicle. Whitehead said the low cost and frequent flights are among the reasons they chose this company. This flight and the next few others will be test flights of the technology as well as a tracking station network put in place to follow the ThumbSats, called ThumbNet.

Some example missions Whitehead foresees for ThumbSat include biological experiments (there is a built-in camera that can act as a microscope), growing crystals in microgravity, monitoring the Earth's magnetic field, or testing new components such as electronics. If several ThumbSats worked together, they could even do science such as looking for gravity waves or monitoring space debris, he said.

NEWS: Saving the Planet One Tiny Satellite at a Time

Interested parties can use a prototype Mission Builder on the ThumbSat website. Whitehead also encourages those who want to use the satellites to get in touch with the company directly. If $20,000 is too steep, he suggested that some missions could be even cheaper due to upcoming competitions.

"The most exciting thing is that we can't foresee what the great minds of the world will come up with to make use of the ThumbSat capability," Whitehead wrote. "Look at all of the amazing hardware add-ons and apps that have been created for smart phones.  Nobody predicted that.  I think we will see a revolution in space science. Space will no longer be elitist."