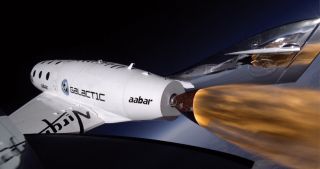 But as Niels Bohr, Nobel laureate in physics, once said: "Prediction is very difficult, especially if it's about the future." [See photos of SpaceShipTwo's latest supersonic test flight]

SPACE.com surveyed a number of commercial space travel experts, asking them what developments we should expect in the field this year — including whether or not large numbers of paying customers will indeed make it to the final frontier in 2014.

Virgin Galactic's efforts to create the world's first commercial spaceline have gained a lot of steam lately. The company has already signed up more than 600 people who aim to fly to suborbital space aboard SpaceShipTwo, at a current price of $250,000 per seat.

"For Galactic, 2014 is the year that we plan to go to space, and start operating commercially," said Virgin Galactic CEO George Whitesides.

Whitesides underscored the need for loosening governmental red tape to make this vision a reality.

In terms of Washington, D.C. processes, he said, "our major hope is that the export control reform process will conclude in a place that enables the U.S. to continue its global leadership of the suborbital spaceflight sector."

Years in the making, and years in the waiting for commercial space travel to become "rocket real," is New Mexico's Spaceport America. Virgin Galactic will establish its headquarters and operate its spaceflights from the sprawling site, billed as the world's first purpose-built commercial spaceport.

A recent development is SpaceX use of Spaceport America to start flying its Falcon 9R reusable rocket — an offshoot of the company's Grasshopper vehicle that has repeatedly flown from McGregor, Texas. Last year, New Mexico officials announced a three-year agreement to lease land and facilities to SpaceX at Spaceport America for the venture.

In addition, Spaceport America's Launch Site Operator License has just been renewed by the Federal Aviation Administration Associate Administrator for Commercial Space Transportation (FAA/AST). The license is required by the FAA for the spaceport to host licensed vertical and horizontal launches. [Photos: Take a Tour of Spaceport America]

Christine Anderson, executive director of the New Mexico Spaceport Authority (NMSA), foresees milestone achievements for the facility, and for private spaceflight in general, in 2014. A majority of NMSA staff, for example, are soon to move to the on-site, newly outfitted Spaceport Operations Center.

"We have supported 20 launches to date and look forward to an increased launch rate in 2014. We are ready to support our tenants, Virgin Galactic and SpaceX," Anderson said.

Anderson is upbeat about the year ahead but watchful.

"In general, I think we will continue to see steady progress in the commercial space industry," she said.

"Like any nascent industry, progress is not always measured in leaps and bounds but is achieved by methodical, diligent work by teams of professionals. I look forward to a year of great progress in the commercial space industry," Anderson added.

"Optimism isalways the fuel of choice in this industry…otherwise there would be no industry," said Henry Vanderbilt, head of the Space Access Society (SAS), a group dedicated to increasing the viability and reducing the cost of commercial access to space travel.

As founder of the SAS, Vanderbilt has long kept an eye on the blossoming prospect of cheaper access to space.

"From the point of view of someone who's been pushing radically cheaper reusable space transportation for 25 years, we're winning," Vanderbilt said. "Multiple groups with the resources and talent to do it now obviously get it, and the government, for the moment at least, is allowing them to get on with it.".

"Mind you, that's cautious optimism," he added. "This is a high-risk business. Things will sometimes go wrong."

Vanderbilt draws from a reservoir of observations, and he served up a top-of-the list tenet.

"Rule number one of projects is, it will take longer and cost more than you planned…doubly so for advanced aerospace vehicle projects," he said.

But Vanderbilt expects that number to double in the coming year, as XCOR Aerospace's suborbital Lynx spacecraft roars through the skies and secretive firm Blue Origin continues to make progress with its vertical takeoff/vertical landing technology

"I wouldn't be greatly surprised if Blue Origin has that engine flying in a testbed this coming year," he said.

In surveying the NASA scene, Vanderbilt looks for the government's Space Launch System to continue to be "expensively useless." Furthermore, he said that NASA's commercial crew program will be in "growing danger" of succumbing to the "bureaucratic side of the force" given the changeover to Federal Acquisition Regulation-based contracting, and for various smaller projects "to succeed in direct proportion to how much they're overlooked by the budget-cutters…so I won't name any of them."

"2014 has all the making of being the year of the commercial space traveler," said David Livingston, founder and host of the radio/Internet talk program, "The Space Show."

"Finally, it looks as if sometime during the year, maybe late in the year, that 'two-year' waiting period for space tourism will finally have arrived," Livingston said. Still, the companies involved do face some challenges.

"My own thoughts are that Virgin Galactic will be the first to fly later this year. But there are still lots of tests and demonstrations needed for first commercial flight in 2014," Livingston said. "Even if commercial flights are delayed, this year has the potential for breakthroughs…as the emerging space industry garners more and more interest, including interest from professional investors.".

How best, then, to capture the tempo and temperament of private space travel in 2014?

"I believe this is best done by showing success and demonstrating responsible management and decision-making, while always moving forward," Livingston said. "For my money, SpaceX is a good role model to follow."

"I think 2014 is a critical year for space tourism," said Jeff Foust, editor of The Space Review, an online magazine with in-depth articles about space exploration issues.

"We should — finally — start to see the first flights into space by Virgin Galactic's SpaceShipTwo, and perhaps the first commercial flights of that vehicle as well, depending on how well their test program proceeds," Foust said.

The start of Virgin Galactic commercial flight this year, Foust said, would be a major success, not just for the company, but also for Spaceport America in New Mexico. Such a milestone would also demonstrate the long-awaited economic payoff of the state's $200 million investment in the spaceport, he said.

"In addition, we should also see the first test flights, although not necessarily into space, of XCOR's Lynx vehicle in 2014, and possibly even commercial flights by the end of the year if all goes well," Foust said.

It's that potential for major activity that makes 2014 a critical year, Foust said.

"If these companies achieve those long-awaited, and sometimes long-delayed, major milestones, it will go far to erase any lingering doubts that suborbital space tourism is a real market, while also enabling opportunities for using those vehicles in other applications, like suborbital research and technology demonstration," Foust said.

Virgin Galactic and XCOR have encountered delays, Foust said. "Those problems have different roots. For Virgin, it appears to be technical issues, while XCOR has been slowed by the limited funding it has access to," he said.

If Virgin and XCOR suffer additional delays, or other problems that slow their development, Foust said, "the doubts about the viability of suborbital space tourism will grow stronger. That's why I think 2014 is such an important year for this field."