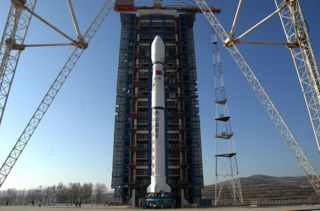 China's state-run Xinhua news agency released a three-paragraph story on the rocket malfunction. Engineers are analyzing the cause of the failure, Xinhua reported.

"The data obtained show that the subsystems of CBERS 3 functioned normally during the [launch]," INPE said.

The compact car-sized CBERS 3 satellite was supposed to enter a 483-mile-high polar orbit with an inclination of 98.5 degrees.

CBERS 3 was the fourth China-Brazil Earth Resources Satellite launched since 1999. Its three predecessors are no longer functioning, forcing Brazil to purchase Earth observation data from other countries.

China and Brazil started cooperating in Earth observation programs in 1988.

CBERS 3 was built by the China Academy of Space Technology, with two of its imaging instruments coming from Brazil and two from China. It was designed for a three-year lifetime.

The satellite's cameras were supposed to collect black-and-white imagery with a top resolution of about 5 meters, or about 16 feet. Its sensors included thermal and infrared imagers capable of distinguishing different types of vegetation and locations where water is stored and consumed.

According to INPE's website, Brazil uses CBERS data to monitor wildfires and deforestation in the Amazon rainforest, observe crop yields and trends in land use, manage water resources, and study urban development.

Like its Landsat counterpart in the United States, the CBERS project distributes imagery for free on the Internet. INPE says it provides about 700 images per day from the CBERS data catalog to hundreds of environmental institutions around the world.

China and Brazil are working on their next joint satellite - CBERS 4 - for launch in 2015. After Monday's launch failure, officials agreed to start discussions in anticipation of the launch of CBERS 4, according to INPE's statement.