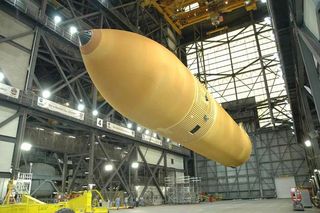 CAPE CANAVERAL - NASA ismapping out plans to test shuttle Discovery'sexternal tank at its Kennedy Space Center launch pad, but a final decision onwhether to proceed with the fuel-loading operation still is pending.

The test would involvepumping more than a half-million gallons of super cold liquid hydrogen andliquid oxygen into the 15-story tank to test changes made to it, agencyofficials said Wednesday.

Among other things, thetest - which would take place about June 1 - would enable engineers todetermine whether four new liquid hydrogen fuel-depletion sensors in the tankare working properly.

Kyle Herring, a spokesmanfor NASA's Johnson Space Center in Houston, said engineers have been asked todraw up plans for a test, but managers still have not made a final decision onwhether to carry it out.

The fuel-depletionsensors serve the same purpose as automobile fuel gauges and also provide aback-up means of making sure the shuttle's main engines shut down properly.

A malfunction could prompta premature shutdown, which could lead to an emergency landing attempt, or theengines could continue running until all fuel was exhausted, potentiallytriggering a catastrophic failure.

One of the four sensorsoriginally installed in Discovery's tank produced unexpectedreadings during an electrical test in late February. Managers subsequentlydecided to replace all four, a move that forced NASA to delayits second post-Columbia test flight from May to July.

NASA encountered problemswith the same sensors during afuel-loading test before Discovery's launchlast July. The troubles did not recur during a subsequent launchcountdown and NASA proceededwith the flight.

KSC spokesman BruceBuckingham said NASA has enough time in its launch-processing schedule toaccommodate a tanking test. Discovery remains scheduled for a May 19 move toits pad and launch still is targeted for July 1.