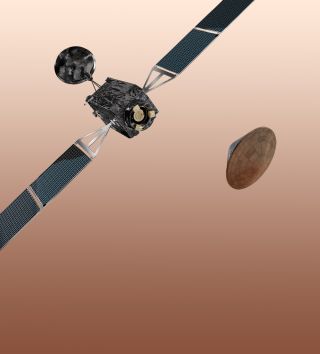 Artist's concept of the ExoMars 2016 spacecraft, which consists of the Trace Gas Orbiter and the Entry, descent and landing Demonstrator Module (EDM).
(Image: © ESA-AOES Medialab)

Russia and the European Space Agency have officially teamed up to send a series of spacecraft to search for signs of life on Mars.

European space officials and Russia's Federal Space Agency (Roscosmos) signed a deal Thursday (March 14) to launch a Mars orbiter mission in 2016 and a rover in 2018 as part of what is now a joint ExoMars program.

The Mars exploration agreement outlines the two agencies' responsibilities for the upcoming unmanned missions. In 2016, ESA will provide the Trace Gas Orbiter to study the atmosphere of Mars to measure its chemical composition, as well as an  entry, descent and landing demonstrator module.

For the 2018 mission, ESA will provide the carrier and the ExoMars rover, which will search for signs that life on Mars existed in the past or present, collecting samples from as deep as 6.5 feet (2 meters) beneath the surface of the Red Planet.

"It will be the first Mars rover able to drill to depths of 2 m, collecting samples that have been shielded from the harsh conditions of the surface, where radiation and oxidants can destroy organic materials," ESA officials said in a statement.

Roscosmos, meanwhile, will supply the rockets to launch both Mars missions, as well as the 2018 descent module and surface platform. Both space agencies will provide scientific instruments and will work together on the scientific goals of the missions, according to ESA officials.

ESA director-general Jean-Jacques Dordain called Thursday's agreement a "momentous occasion" for the ExoMars program after meeting with the head of Roscosmos, Vladimir Popovkin, at the ESA headquarters in Paris. Dordain said in a statement that the agreement "will demonstrate the competitiveness of European industry, be important for preparing a solid participation of ESA in future international exploration missions and address the key question of whether life ever arose on Mars."

NASA pulled out of the ExoMars program last year due to budget cuts in its planetary science program, but ESA officials said the U.S. space agency will still contribute some communications and engineering support for the new Mars missions.