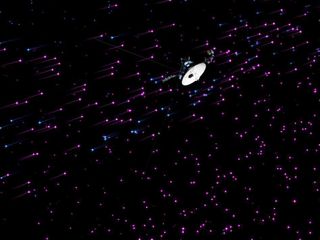 This still image and set of animations show NASA's Voyager 1 spacecraft exploring a new region in our solar system called the "magnetic highway." In this region, the sun's magnetic field lines are connected to interstellar magnetic field lines, allowing particles from inside the heliosphere to zip away and particles from interstellar space to zoom in. Image released Nov. 29, 2012.
(Image: © NASA/JPL-Caltech)

NASA's Voyager 1 spacecraft has discovered a new layer of the solar system that scientists hadn't known was there, researchers announced today (Dec. 3).

Voyager 1 and its sister probe Voyager 2 have been traveling through space since 1977, and are close to becoming the first manmade objects to leave the solar system.

"We do believe this may be the very last layer between us and interstellar space," Edward Stone, Voyager project scientist based at the California Institute of Technology, in Pasadena, Calif., said during a teleconference with reporters. "This region was not anticipated, was not predicted."

Therefore, he said, it's hard to predict how soon Voyager will leave the solar system behind altogether. [How NASA's Voyager 1 and 2 Probes Work (Infographic)]

"Things have actually changed dramatically," said Stamatios Krimigis, principal investigator of the low-energy charged particle instrument, based at the Johns Hopkins Applied Physics Laboratory in Laurel, Md. "The particles from outside have increased a lot and those on the inside … have dropped quite a bit."

The Voyagers are NASA's longest-running spacecraft, and will keep traveling outward even after they've left the sun's neighborhood. However, it will be at least 40,000 years before they ever come close to another star, Stone said.

Long before that the probes will run out of power to operate their scientific instruments and beam their findings back home.

"We're very lucky that there seems to be a compatibility between our mission and the extent of the heliosphere," Stone said.