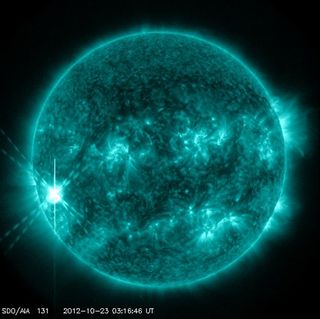 The sun unleased a powerful solar flare late Monday (Oct. 22), releasing waves of radiation into space that have already caused a short radio blackout on Earth.

The flare erupted from the sunspot AR 11598 (short for Active Region 11598), and reached peak brightness at 11:22 p.m. EDT (0322 GMT this morning, Oct. 23), according to scientists working on NASA's Solar Dynamics Observatory (SDO), a space telescope that constantly monitors the sun with high-definition cameras. It ranked as an X1.8 solar flare, one of the strongest types of solar flares, according to the U.S. Space Weather Prediction Center (SWPC) run by NOAA and the National Weather Service.

The same sunspot produced three strong flares before this one in just the two days since it became visible from Earth's perspective. "This means more flares are probably in the offing, and they will become increasingly Earth-directed as the sunspot turns toward our planet in the days ahead," astronomer Tony Phillips wrote on Spaceweather.com, a website that tracks skywatching and space weather events.

Solar flares are caused when magnetic activity ramps up in certain patches, called sunspots, on the surface of our star. Scientists measure the strength of solar flares in terms of energy classes, with X-class flares the most powerful sun storms. Moderate flares rank as class M storms and can supercharge Earth's northern lights displays when aimed at our planet. Class C solar flares are the weakest of the bunch and have little effect on Earth. [Photos: Sunspots on Earth's Closest Star]

Monday's solar flare was captured in photos and video by SDO, and appears as a bright white flash coming off the sun. The flare was a short-lived type of solar eruption called an impulsive flare (as opposed to the other type, called a gradual flare).

"Impulsive flares aren't generally associated with severe space weather, and additionally, this region is still several days away from directly facing Earth from center disk," SWPC officials wrote. "Nonetheless, the potential for continued activity remains, so stay tuned for updates as Region 1598 makes its way across the visible disk."

The sun is getting more and more active lately as it approaches an expected peak of magnetic activity in 2013. This activity naturally waxes and wanes on an 11-year weather pattern. The sun's current cycle is called Solar Cycle 24.