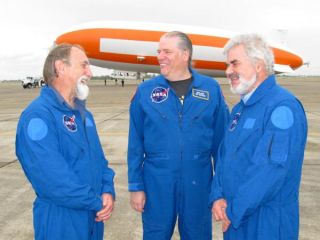 NASA researchers Alan Ehrgott, Mike Koop, and Derek Sears wait to board the zeppelin Eureka for a meteorite hunt on May 3, 2012.
(Image: © NASA)

In what must be a meteorite-hunting first, a team of scientists took a zeppelin out Thursday (May 3) to search for fragments from a rare daytime fireball that exploded over California last month.

As the zeppelin cruised over the foothills of California's Sierra Nevada mountains at an altitude of about 1,000 feet (300 meters), the scientists scanned the ground for any signs of recent impact craters. Their aim: to find fragments of the minivan-size space rock that slammed into Earth's atmosphere on April 22.

Researchers are eager to get their hands on these meteorites, because they think the parent asteroid was a rare and primitive type called a carbonaceous chondrite. Such space rocks are typically packed full of organic molecules — carbon-based compounds that are the building blocks of life as we know it.

"It's a type of meteorite you'd like to have as an origin-of-life researcher," said Peter Jenniskens of the SETI Institute and NASA's Ames Research Center in Moffett Field, Calif., one of the six scientists who went up in the Eureka Thursday. [Fallen Stars: A Gallery of Famous Meteorites]

The helium-filled Eureka is one of just two zeppelins flying today, according to Airship Ventures, the company that owns and operates it. The 246-foot (75-m) Eureka is slightly longer than a standard Boeing 747 jet.

Zeppelins are different than blimps, though both are classified as airships. Zeppelins sport a light but rigid internal frame, while blimps do not. Blimps' shapes are maintained solely by the pressure of their internal lifting gas.

Jenniskens said conditions were great during the team's five-hour ride, with cloudy skies keeping crater-obscuring shadows at a minimum. The scientists spotted 12 possible impact features from the April 22 fall, though they're not sure yet if any of them are the real deal. The next step is to come back and check out the candidates on foot.

Several fragments from the April 22 fireball have been found near the California towns of Coloma and Lotus, in historic Gold Rush country. But Jenniskens and his colleagues want bigger chunks, and more of them.

The clock is ticking, he added, because Earth's weather and organisms are already degrading the meteorites from their pristine in-space condition.

Even if the zeppelin expedition doesn't lead directly to any meteorite discoveries, it may still have an impact. Jenniskens hopes the publicity the airship trip is generating inspires amateurs to do a little space-rock hunting of their own.

A lot of boots on the ground are needed, because the fall area measures roughly 25 miles long by 6 miles wide (40 kilometers by 10 kilometers), Jenniskens said.

If you do want to try your luck, be on the lookout for rocks with a so-called fusion crust. This outer layer — caused by the extreme heat meteorites experience on their journey through Earth's atmosphere — should have a sort of velvety sheen, Jenniskens said.

If you do find something intriguing, don't pick it up with your bare hands, he added. Wrap it in aluminum foil and send him a picture, along with information about where and when you found the rock. Jenniskens is also interested in viewing any video footage that may exist of the April 22 fireball, which could help researchers pin down just where the asteroid came from in space.

Jenniskens can be reached at petrus.m.jenniskens@nasa.gov.