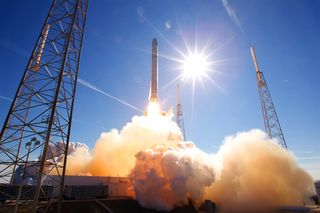 SpaceX's Dragon will lift off from the Cape Canaveral Air Force Station in Florida. Here, the capsule launches atop a Falcon 9 rocket on its first ever flight test in December 2010.
(Image: © SpaceX)

On May 19, if all goes well, the private spaceflight company SpaceX will launch the first commercial spaceship ever to visit the International Space Station. But the mission will be like no other U.S. flight to the orbiting laboratory.

SpaceX's unmanned Dragon capsule is due to deliver food, supplies and science experiments to the outpost as a test mission for NASA. The space agency awarded the company a $1.6 billion contract for 12 robotic resupply flights to fill the delivery needs left over by the space shuttle fleet's retirement last year.

SpaceX is one of two companies with NASA contracts for robotic cargo delivery flights (Virginia's Orbital Technologies Corp. is the other), but is the first to actually try a launch. And as the first American-built robotic cargo ship ever to visit the space station, there are some unique aspects of this mission NASA is hoping will succeed.

Here's how the robotic mission is expected to play out:

The Dragon capsule is set to lift off aboard SpaceX's Falcon 9 rocket from Cape Canaveral Air Force Station in Florida. SpaceX has use of the facility's Space Launch Complex 40, where the rocket will blast off May 19 at 4:55 a.m. EDT, if plans stay on schedule. The initial ascent is powered by Falcon 9's first stage, consisting of nine SpaceX Merlin 1C rocket engines.

At a little before 180 seconds into the flight, the Falcon 9's first stage engines will cut off, and the first stage will drop off, falling back to Earth. At this point, the booster's second stage engines should start, further propelling the vehicle into orbit.

Around 9 minutes into the flight, the Dragon capsule should separate from Falcon 9's second stage and orbit on its own. The capsule will deploy its solar arrays to start soaking up energy from the sun. At this point, Dragon is on its own and must maneuver using its onboard thrusters. [The World's Tallest Rockets: How They Stack Up]

After reaching orbit, Dragon will begin a series of checkouts to make sure it's functioning as designed and ready to meet up with the station.

Teams on the ground will lead the vehicle through tests of its Absolute GPS (AGPS) system, which uses global positioning system satellites to determine its location in space. It will also demonstrate its performance in free drift phase, with thrusters inhibited. Finally, Dragon will test out its abort system to prove it can terminate its activities and move away from the space station if something goes wrong.

During its third day in orbit, Dragon will fire its thrusters to perform a fly-under of the International Space Station, swooping to 1.5 miles (2.5 kilometers) below the outpost. At this point, the capsule will make radio contact with the station using a system called the COTS Ultra?high frequency Communication Unit to communicate.

During the fly-under, Dragon will also test a secondary locator system called the relative GPS system, which uses the spacecraft's position relative to the space station to establish its coordinates.

While Dragon is flying under the station, the six-person crew inside the orbiting laboratory will be monitoring their new visitor. They will use a crew command panel onboard the station to communicate with the capsule and send it a command to turn on a strobe light.

After completing the fly-under, Dragon will loop out in front, above and then behind the space station to position itself for docking.

The next day, during Dragon's fourth day of flight, the spacecraft will fire its thrusters again to bring it within 1.5 miles (2.5 kilometers) of the space station. Once there, NASA's Mission Control team in Houston will run through a "go-no go" call to confirm all teams are ready for rendezvous. If everyone is "go," Dragon will inch closer, to about 820 feet (250 meters) away from the space station.

At this point, a series of final checkouts will be performed to make sure all of Dragon's location and navigation systems are accurate. If all looks good, Dragon's SpaceX control team on the ground will command the vehicle to approach the space station. When it reaches 720 feet (220 meters), the astronauts onboard the outpost will command the capsule to halt.

At this position, Mission Control will tell the space station crew they are "go" for capturing Dragon. NASA astronaut Don Pettit will use the station's robotic arm to reach out and grab Dragon, pulling it in to the bottom side of the lab's Harmony node, and then attaching it.

The next day, after more checkouts, the crew will open the hatch between Dragon and the station. Over the coming weeks, the astronauts will spend about 25 hours unpacking the 1,014 pounds (460 kilograms) of cargo that Dragon delivers. Though none of the cargo is critical (since this is a test flight), the capsule will arrive bearing food, water, clothing and supplies for the crew.

Dragon is due to spend about 18 days docked at the International Space Station. When it's time to let it go, the station astronauts will use the robotic arm to maneuver the capsule out to about 33 feet (10 meters) away, then release it. Dragon will then use its thrusters to fly a safe distance away from the laboratory.

About four hours after departing the space station, Dragon will fire its engines to make what's called a de-orbit burn. This burn will set the capsule on a course for re-entry through Earth's atmosphere. The spacecraft is equipped with a heat shield to protect it from the fiery temperatures of its 7-minute re-entry flight.

Dragon is due to splash down in the Pacific Ocean to end its mission. There, recovery crews will be waiting to collect the capsule about 250 miles (450 kilometers) off the West Coast of the United States.