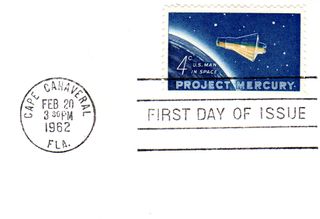 The 1962 4-cent "Project Mercury" stamp marked the first time that the U.S. issued a previously unannounced commemorative stamp at the same time as the event it was issued to honor: John Glenn’s historic Friendship 7 spaceflight.
(Image: © collectSPACE.com)

Fifty years ago today (Feb. 20), John Glenn, the first American to orbit the Earth, relied on ground stations located across the planet to communicate with his control team. But after his Mercury spacecraft, Friendship 7, safely splashed down, it was another type of station that took over tracking his historic mission: U.S. post offices.

For the first and only time in the country's postal history, the United States Post Office Department — since 1971, the U.S. Postal Service — surprised the public with the release of a secret stamp celebrating Glenn's successful mission. The 4-cent "Project Mercury" postage stamp was revealed and immediately put on sale in 305 post offices within an hour of Glenn's triumphant return to Earth at 2:43 p.m. EST (1943 GMT) on Feb. 20, 1962.

Half a century later, collectors are still searching for those first-day-of-issue stamps.

"The U.S. Post Office Department signaled the first orbital flight of a United States astronaut today with the issuance of a commemorative stamp, placed on sale throughout the country on the exact hour Astronaut John Glenn's historic flight was officially completed," the department stated. "It is the first time in history that a previously unannounced commemorative stamp was issued simultaneously with the event it memorializes."

As news of the stamp spread over radio and television, the public began lining up at their closest post offices that had stock of the now no longer secret issue. Collectors in particular drove many miles to have their blank envelopes postmarked with the surprise stamp, creating a collectible for that first day's release and the historic space flight it honored.

Without a way to coordinate nationwide, collectors couldn't know however if such "first day covers" existed for all 305 stations. To this day, 50 years later, as many as 20 cities are still missing examples.

The Post Office Department wanted to keep the stamp a secret in case the mission failed. Keeping the production and distribution of more than one million postage stamps a surprise though, required some creative logistics. [Photos: John Glenn's Space Legacy]

"Designed and printed under tight security precautions at the Bureau of Engraving and printing, the stamp was distributed well in advance of the flight to more than 300 large postal installations, where it was held intact until the flight was completed," the department stated. "None of the postmasters knew what the closely guarded packages contained until the word was given from Washington [to remove the wrappers and place them on sale]."

Knowledge of the Project Mercury stamp project was kept on a need-to-know basis. Just over 400 people knew the secret, about half of them postal inspectors. The stamp's designer, Charles Chickering, worked from home to create the blue and yellow depiction of Friendship 7 circling the Earth while all along claiming to be on vacation.

The picture engraver also gave the impression he was on leave, but came in at night. Another engraver who did the lettering worked on weekends.

"At the Bureau of Engraving and Printing, a rumor was spread that a new multicolor Giori press was locked away for printing test runs of multicolored money," the USPS later recounted in a 2005 release. "In fact, the new press was being used to print the Project Mercury stamp."

Once the stamps were ready to ship, they were loaded in mailbags with combination locks and marked "Classified Material" and "Do Not Open." They were delivered to the selected postal stations, but addressed to the attention of the postal inspector so curious postmasters wouldn't take an early peek.

Even with all the precautions, the department's secret was almost blown.

According to the American First Day Cover Society's (AFDCS) "First Days" magazine, a newspaper in Florida reported a rumor of a secret stamp in the run up to Glenn's original launch date in December 1961. The Post Office Department was able to successfully dismiss the report and by the time Friendship 7 actually launched, two months later on the mission's 11th scheduled date, the stamp's release came as a true surprise.

The site of the official first-day-of-issue cancellation was Cape Canaveral, Fla., Glenn's launch site, where the Post Office Department established a temporary station.

But given the stamp was a surprise and limited to just 305 post offices, it wasn't long before collectors began trying to assemble nationwide sets. Further limiting the potential for first day covers was the time of day when the stamps were released. [Infographic: John Glenn, 1st American in Orbit]

The call from Washington to open the mailbags came at 3:30 p.m. EST. For post offices on the East Coast, such as Boston, New York City, and Baltimore, that meant that customers had only a few hours before the offices closed to obtain first day postmarks. The most time was afforded at the station farthest west, Honolulu, Hawaii, where the stamps were released at 10:30 a.m.

By the following year, one enthusiastic collector, Patricia Grace Siefert, had compiled a guide. The typewritten "An Unauthenticated Classification of the First Day Covers of the Project Mercury Stamp" documented postmarks from 248 of the official cities, as well as others including U.S. Navy ship-board cancels and "unofficial cities."

In the case of the latter, collectors had purchased stamps from one of the 305 post offices identified by the Post Office Department and then drove to other post offices to have them canceled. By July 1963, Seifert had cataloged 90 of these "unofficial" cities.

Seifert warned however, about the chances for fraudulent covers, particularly when it came to envelopes canceled in unofficial cities. "Especially should we be cautious of covers from cities whose location is at such a distance from one of the official cities that it would have been impossible for the stamp to have been canceled there," Seifert wrote.

Continue reading at collectSPACE.com to learn the status of the search for the secret stamps and what John Glenn remembers of the stamp’s release.