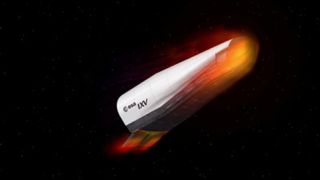 A European Vega rocket will carry ESA’s Intermediate eXperimental Vehicle into space. The vehicle will then return to Earth to test a range of enabling systems and technologies for atmospheric re-entry.
(Image: © ESA)

A European-built robot space plane could be flying in orbit before the end of the decade if the project's planning discussions, which kick off this month,  come to fruition.

The spacecraft would be Europe's civilian equivalent to the U.S. Air Force's unmanned X-37B Orbital Test Vehicle, a robotic miniature space shuttle that has flown on two missions since 2010.

This European robot space plane would be an evolved version of European Space Agency’s Intermediate Experimental Vehicle (IXV), which is expected to make its first flight in 2013.

Planning for the space plane starts this month because the final industrial phase for the IXV  is also under way, with the awarding of manufacturing and assembly contracts at the Paris air show, ESA’s IXV project manager Giorgio Tumino said.

"We have a very committed industrial team," Tumino told SPACE.com.

Like the IXV prototype, ESA's future robot space plane would fly on an unmanned Vega rocket from the Guiana Space Center in Kourou, French Guiana. The spacecraft could be used to monitor the Earth or service satellites, then re-enter the atmosphere and land like an aircraft.

For the full-size spacecraft to fly in low-Earth orbit before 2020, its development, testing and production must be approved by 2015 by ESA’s member states. This decision would follow three years of conceptual and preliminary vehicle design studies that could start next year.

The hope is that the planning that starts this month will lead to ESA member states approving the design studies in 2012, project officials said.

ESA's Vega rocket is slated to make its maiden launch later this year. A successful test flight would move the IXV prototype, a key milestone in the space plane project, closer to its own 2013 test.

The vehicle has four thrusters and two body flaps at the rear to provide flight control. For comparison, NASA’s space shuttle vehicle also has a body flap. The flaps are used for pitch control, which determines whether the nose of the shuttle goes up or down, during re-entry.

Like Europe's IXV, the Boeing-built X-37B is used to test reusable spacecraft technologies but it is also used for classified operations, with many experts suggesting it can perform orbital reconnaissance functions. [Photos: USAF Launches X-37B Space Plane]

The first X-37B launched in April 2010 and that vehicle, OTV-1, made an autonomous landing nine months later in California in December. The second X-37B, OTV-2, was launched in early March 2011 to begin a similar 270-day mission.

When the IXV launches on its first test flight, it is expected to soar into orbit from French Guiana and then splash down in the Pacific Ocean 21/2 hours later using parachutes. The robotic spacecraft is expected to re-enter the atmosphere at Mach 20, more than 20 times the speed of sound.

By performing maneuvers in the atmosphere during descent, the spacecraft should be able to slow itself considerably, to about Mach 2. Parachutes should then be open to slow the craft even further for a water landing.

The IXV will carry 600 sensors to record the effects of its atmospheric re-entry and descent on its heat shield and other systems, ESA officials have said.

ESA began the IXV project in 2005 with plans for a 2010 test launch, but by 2009 delays had set the flight back to 2012, and it later slipped to 2013. In 2006, ESA officials said that the IXV’s preliminary and detailed design and development work, manufacture, assembly and testing would cost about 100 million euros (about $144 million).

Originally managed by a new European joint venture company called NGL Prime, the project was moved to Thales Alenia Space when NGL Prime closed in 2008. This change in  management also led to a redesign of IXV in 2009.

Tumino declined to give a figure for the latest total cost of IXV due to these industrial changes as final negotiations with industry were under way.