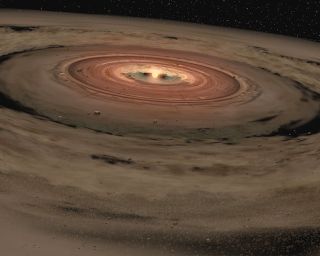 This artist's illustration shows a brown dwarf with a disk of planet-forming material around it. Brown dwarfs are bodies without enough mass to ignite nuclear fusion and become stars.
(Image: © NASA/JPL-Caltech)

The search for alien life usually focuses on planets around other stars. But a lesser-known possibility is that life has sprung up on planets that somehow were ejected from their original solar systems and became free-floating in the universe, as well as on small bodies called sub-brown dwarfs, which are stars so small and dim they are not really stars at all, but function more like planets.

Studies show these bodies could potentially host atmospheres and surfaces where some form of extraterrestrial life could take hold.

Researcher Viorel Badescu of the Polytechnic University of Bucharest in Romania recently investigated the possibilities for life on free-floating planets (FFPs) and sub-brown dwarfs (SBDs) that might contain lakes of the chemical ethane. He found that such life is not impossible, though it would be significantly different from life on Earth.

His findings were detailed in the August 2010 issue of the journal Planetary and Space Science.

Sub-brown dwarfs are not large enough to generate the nuclear fusion that powers normal stars. Having failed as stars, they slowly radiate their internal thermal energy as heat and very dim light – hence, they are extremely hard to detect. Both free-floating planets and sub-brown dwarfs don't always orbit around a parent star, and can be found in interstellar space.

Lacking a star, life on FFPs and SBDs would have to rely on the body's internal heat and the decay of radioactive elements for energy. "One may expect a rather stable heat release for long periods of time, exceeding two or three times the present age of the solar system," said Badescu. Though meager, this heat could be trapped on the object by an optically thick atmosphere.

But life needs more than just heat to thrive. Another important ingredient for habitability is a solvent – a liquid environment where important chemical reactions can occur. Life on Earth uses water as a solvent, but that's not the only option.

"Synthesis of observational data makes it possible to conceive chemical reactions that might support life involving non-carbon compounds, occurring in solvents other than water," Badescu wrote in his paper.

In particular, Badescu found that ethane – a compound of carbon and hydrogen – could function well as a solvent for alien life. [5 Bold Claims of Alien Life]

It seems odd to consider the possibility of life on an object more massive than Jupiter or Saturn, especially since most scientists think such gas giant planets -- with their high radiation, hostile atmospheres and potential lack of a planetary surface -- would not harbor life as we know it.

But Badescu said that some sub-brown dwarfs might have lakes or oceans of liquid ethane that could prove quite homey to alien microbes.

The main difference between water and ethane for use as a solvent is that water is a polar molecule, meaning one end of the molecule is positively charged, and one end of it is negatively charged. This has proven integral to Earth life, because the polar properties of water enable certain kinds of molecules to dissolve easily in water, while others remain stable.

The molecules that code for life – DNA and RNA – have electrical charge properties that allow them to change their internal structure – the specific order of the base molecules within them – and still have the same overall physical properties. This is all enabled by the way their charge properties interact with the polar quality of water.

That would not be the case with ethane, which is a non-polar molecule. With DNA and RNA in this situation, "small changes in molecular structure may create large changes in molecular behavior," Badescu said. "That is not acceptable in an encoding biopolymer that must support Darwinian evolution, in which case, the molecule's physical properties must remain relatively constant when the informational content changes."

However, the challenge is not insurmountable – a completely different type of molecule could be used to code life's blueprint on a FFP or SBD.

Ultimately, free-floating planets and sub-brown dwarfs could prove a fertile place to look for extraterrestrial creatures.

Besides their habitable qualities, these bodies seem to be quite common in the universe. Sub-brown dwarfs weighing between 1 and 13 Jupiter masses may be about as common as stars, Badescu said.

"The total number of FFPs and SBDs may exceed the number of stars by two orders of magnitude, although most of them should be low-mass rock/ice planetary embryos ejected from planetary systems in formation," i.e. not the type with large gaseous atmospheres that would retain the heat required for life, Badescu said. "Thus, it might be conceivable that FFPs and SBDs are the most common sites of life in the universe."

Given this fact, he advocated ramping up our efforts to search for free-floating planets and sub-brown dwarfs and to characterize them to determine which might be habitable.

"Present day technology does not allow a systematic search for habitable FFPs and SBDs," Badescu said. "However, the existing observation programs of young star forming regions should be supplemented with activities related to FFP and SBD identification and characterization."