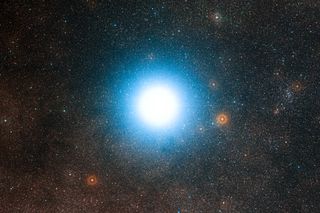 The hunt for nearby exoplanets has just heated up considerably.

The instrument, called NEAR (Near Earths in the Alpha Cen Region), is a thermal coronagraph installed on the European Southern Observatory's (ESO) Very Large Telescope (VLT) in Chile.

Coronagraphs block the superbright light of stars, potentially allowing dim orbiting planets to be seen. Since NEAR is a thermal coronagraph, team members are looking for heat radiated by worlds in the Alpha Centauri system rather than visible-range starlight reflected off their surfaces.

In 2016, astronomers discovered a roughly Earth-size planet circling Proxima Centauri. This planet, known as Proxima b, appears to lie in the habitable zone, the just-right range of distances where liquid water might be stable on a planet's surface.

This past April, astronomers announced the detection of another possible planet circling farther away from Proxima Centauri. This world, known as Proxima c, has yet to be confirmed, however; it remains a planet candidate.

No planets are known to reside near the binary star Alpha Centauri AB, but NEAR may change that fact. The coronagraph — a joint project of ESO and Breakthrough Watch, a program that hunts for potentially Earth-like planets around nearby stars — upgrades an existing VLT instrument called VISIR (VLT Spectrometer and Imager for the Mid-infrared).

This upgrade slashes the overwhelming glare of the two parent stars and optimizes the instrument's sensitivity in infrared wavelengths that might be given off by a habitable-zone planet. NEAR also employs "adaptive optics" to compensate for the blur induced by Earth's atmosphere, Breakthrough Watch representatives said.

"NEAR is the first and (currently) only project that could directly image a habitable exoplanet," Breakthrough Watch lead scientist Olivier Guyon said in a statement. "It marks an important milestone. Fingers crossed — we are hoping a large habitable planet is orbiting Alpha Cen A or B."

NEAR is capable of spotting planets about twice Earth's size or bigger in the Alpha Centauri system, project team members said.

The "first light" operations that kicked off on May 23 run through tomorrow (June 11), and represent 100 hours of observing time.

Breakthrough Watch is part of the Breakthrough Initiatives, a suite of programs designed primarily to search for alien life. The initiatives also include the SETI (search for extraterrestrial intelligence) program Breakthrough Listen and Breakthrough Starshot, which aims to launch superfast laser-sailing probes to Proxima b and other nearby exoplanets in the next 30 years or so.

"Human beings are natural explorers," Breakthrough Initiatives founder Yuri Milner said in the same statement. "It is time we found out what lies beyond the next valley. This telescope will let us gaze across."