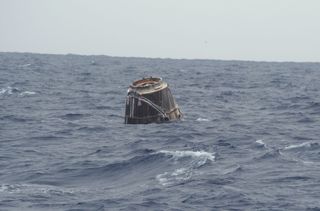 Lung-tissue samples grown on the International Space Station, which have just arrived back on Earth, could help researchers understand how space travel affects breathing.

Little is known about how conditions in space affect astronauts' lungs, according to Joaquin Cortiella, director of the Lab of Tissue Engineering and Organ Regeneration of the University of Texas Medical Branch (UTMB) at Galveston. However, if microgravity or exposure to radiation significantly changes the lungs' capacity to self-repair, future astronauts on a mission to Mars could struggle with serious breathing problems.

"There is very little scientific information with regards to humans that would look at the cellular level," Cortiella told Space.com. "There have been experiments that looked at clinical things like breathing, pressure in the lungs, but in terms of the cellular part there have only been a few animal studies." [The Human Body in Space: 6 Weird Facts]

These studies showed that the animals developed fibrosis in the lungs during the stay in space, Cortiella said. Fibrosis is a thickening of tissue typical for scars after injuries.

Cortiella, together with his colleague Joan Nichols, a professor of Internal Medicine and Microbiology and Immunology at UTMB, developed an experiment to improve the understanding of what happens to lungs in space.

The researchers created a set of samples of bioengineered lung tissue consisting of the so-called progenitor cells and stem cells that eventually form lung tissue growing on specially designed scaffolding made of collagen and elastin. One set of the samples launched to the International Space Station (ISS) in mid-August this year aboard SpaceX's CRS-12 resupply mission, which recently returned to Earth. The second set, a control group, remained at UTMB.

"They are very small pieces, about 3 cm by 3 cm by 3 cm, housed in small bags that act like little bioreactors supporting the function of these cells and keeping them alive," Nichols told Space.com.

"Periodically, we take some of the samples, remove some of the fluid, some of the media that surround the pieces of tissue so that we can look at the lung tissue," she added. "Astronauts at the ISS have been doing the same."

The experiment was designed so that both sets of lung-tissue samples were held in the exact same conditions. The only difference was the space environment of the ISS.

"The ones that we have seen have grown and developed the way they were supposed to; they have grown into what looks like a small piece of tissue," Nichols said. "The few pictures we received from the astronauts that are doing the experiment for us on the space station look very good; they seem to be prolific."

At the end of the experiment, six of the samples returned to Earth for Nichols to study in detail. The researchers will look for signs of fibrosis or other cellular changes and differences between the Earth-grown samples and those cultivated in space. They will also look at the structure of the tissues and the activity of immune cells.

Nichols said that understanding how the lung cells grow in space could help design methods to mitigate the potential adverse effects of space travel.

"If we can tell what's going on with these cells and how they function, we might be able to intervene [and] provide them with therapy that would help them," Nichols said.

"In the next stage, we will be using some nanoparticles that people could actually breathe, the same way you can breathe the therapy for asthma," she added.

According to Cortiella, knowledge gained during the project could also benefit people on Earth with conditions such as asthma or cystic fibrosis.

"It will help us in terms of looking at what parameters or where in the cell cycle we need to target," Cortiella said. "There is a very good applicability of this type of research in clinical trials."