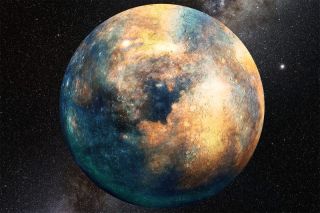 A planetary-mass object the size of Mars may be lurking in the outer solar system.
(Image: © Heather Roper/LPL)

A planet-size object may be orbiting the sun in the icy reaches of the solar system beyond Pluto.

Scientists at the University of Arizona's Lunar and Planetary Laboratory (LPL) have determined that an unseen object with a mass somewhere between that of Earth and Mars could be lurking in the Kuiper Belt, a region beyond Neptune filled with thousands of icy asteroids, comets and dwarf planets.

In January 2016, a separate group of scientists predicted the existence of a Neptune-size planet orbiting the sun far, far beyond Pluto — about 25 times farther from the sun than Pluto is. This hypothetical planet was dubbed "Planet Nine," so if both predictions are correct, one of these putative objects could be the solar system's 10th planet.

The so-called "planetary-mass object" described by the scientists from LPL appears to affect the orbits of a population of icy space rocks in the Kuiper Belt. Distant Kuiper Belt objects (KBOs) have tilted orbits around the sun. The tilted orbital planes of most KBOs average out to something called the invariable plane of the solar system.

But the orbits of the most distant KBOs tilt away from the invariable plane by an average of 8 degrees, which signals the presence of a more massive object that warps its surroundings with its gravitational field, researchers said in a study due to be published in The Astronomical Journal.

"The most likely explanation for our results is that there is some unseen mass," Kat Volk, a postdoctoral fellow at LPL and the lead author of the study, said in a statement. "According to our calculations, something as massive as Mars would be needed to cause the warp that we measured."

These KBOs act a lot like spinning tops, Renu Malhotra, a professor of planetary sciences at LPL and co-author of the new study, said in the statement.

"Imagine you have lots and lots of fast-spinning tops, and you give each one a slight nudge … If you then take a snapshot of them, you will find that their spin axes will be at different orientations, but on average, they will be pointing to the local gravitational field of Earth," she said. "We expect each of the KBOs' orbital tilt angle to be at a different orientation, but on average, they will be pointing perpendicular to the plane determined by the sun and the big planets."

It may sound a lot like the mysterious Planet Nine, but the researchers say the so-called planetary-mass object is too small, and too close, to be the same thing. Planet Nine lies 500 to 700 astronomical units (AU) from Earth, and its mass is about 10 times that of Earth. (One AU is the average distance at which Earth orbits the sun — 93 million miles, or 150 million kilometers. Pluto orbits the sun at a maximum distance of just less than 50 AU.)

"That is too far away to influence these KBOs," Volk said. "It certainly has to be much closer than 100 AU to substantially affect the KBOs in that range."

Though no planet-size objects have been spotted in the Kuiper Belt so far, the researchers are optimistic that the Large Synoptic Survey Telescope (LSST), which is currently under construction in Chile, will help find these hidden worlds. "We expect LSST to bring the number of observed KBOs from currently about 2,000 to 40,000," Malhotra said.

"There are a lot more KBOs out there — we just have not seen them yet," Malhotra added. "Some of them are too far and dim even for LSST to spot, but because the telescope will cover the sky much more comprehensively than current surveys, it should be able to detect this object, if it's out there."