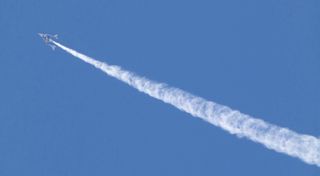 The vehicle, known as VSS Unity, was hauled into the skies above Mojave, California, this morning (June 1) by the carrier aircraft WhiteKnightTwo. Then, Unity was dropped, and pilots Dave Mackay and C.J. Sturckow guided the space plane to a runway landing, Virgin Galactic representatives said.

The successful test marked the fifth unpowered "glide flight" for Unity and its ninth trial flight of any sort. The space plane also has performed four captive-carry tests, during which it stayed attached to WhiteKnightTwo from takeoff to touchdown.

Virgin Galactic loaded about 1,000 lbs. (450 kilograms) of water into a ballast tank near VSS Unity's rear for today's test, moving the spacecraft's center of gravity backward.

"That enabled us to explore the flight conditions we will experience during rocket-powered flights," , company representatives wrote in a description of today's flight. "By jettisoning the water ballast on descent, we were also able to confirm handling characteristics as the vehicle's center of gravity moved forward. Unity completed the flight with a safe and smooth landing in its lighter-weight configuration."

VSS Unity's glide flights have gone well, and as a result, Virgin Galactic is getting ready to transition to the next part of the test campaign, company representatives said.

"To that end, as we analyze the data from today's flight, we will be moving into a period of ground-based activity focused on preparation for fueled, and then powered, flights," they wrote in the description.

After its test campaign wraps up, the six-passenger VSS Unity will be ready to fly customers on trips to suborbital space that offer views of Earth against the blackness of space and a few minutes of weightlessness. Tickets for this experience are currently selling for $250,000 apiece.