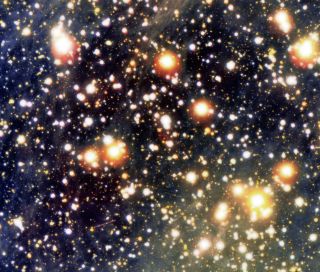 This Very Large Telescope image is a color composite view of the the sky field around the neutron star RX J1856.5-3754 (in the exact center of image) and the related cone-shaped nebula. The trail of an asteroid is seen in the field with intermittent blue, green and red colours
(Image: © European Southern Observatory)

A strange quantum phenomenon predicted more than 80 years ago finally may have been observed in nature.

In 1930, physicists Werner Heisenberg and Hans Heinrich Euler predicted that very strong magnetic fields could change the polarity of light waves in a vacuum (where polarity refers to the orientation of the light's electric and magnetic fields). This effect, which they dubbed "vacuum birefringence," is not predicted by classical physics.

Now, scientists using the European Southern Observatory's (ESO) Very Large Telescope (VLT) say they may have observed this effect in the light coming from a neutron star— a cosmic object with a very strong magnetic field. [Video: The Neutron Star Evidence for Vacuum Birefringence]

Neutron stars are the densest objects in the universe — a tablespoon of neutron-star material would weigh about 1 billion tons (900 million metric tons) on Earth, according to NASA. A "regular" star, like the sun, is puffed up by the fiery engine at its core. But when that engine goes out, the material that makes up the star may collapse into a much smaller area and create a neutron star. [How Neutron Stars Work (Infographic)]

The new research used observations of neutron star RX J1856.5-3754, located about 400 light-years from Earth, according to a statement from ESO. Even though it is one of the closest known neutron stars to Earth, it is incredibly faint, and its visible light could be observed only by using the FORS2 instrument on the VLT, which is "at the limits of current telescope technology," according to the statement.

Vacuum birefringence "can be detected only in the presence of enormously strong magnetic fields, such as those around neutron stars," study co-author Roberto Turolla, a scientist at the University of Padua in Italy, said in the statement.

The light detected with the FORS2 instrument showed "a significant degree" of linear polarization ("around 16 percent") that is "likely due to the boosting effect of vacuum birefringence occurring [in] the area of empty space" around the neutron star, ESO officials said in the statement.

In classical physics, a vacuum is entirely empty, but in quantum physics, there are "virtual particles" that are constantly appearing and vanishing in the vacuum of space. Heisenberg and Euler used a theory called quantum electrodynamics (QED) to show how the quantum properties of a vacuum would influence light waves.

"The high linear polarisation that we measured with the VLT can't be easily explained by our models unless the vacuum birefringence effects predicted by QED are included," said study lead author Roberto Mignani, a scientist at the National Institute for Astrophysics in Italy and the University of Zielona Gorá in Poland.

"According to QED, a highly magnetised vacuum behaves as a prism for the propagation of light," Mignani said. (An actual prism bends light, causing it to fan out and reveal its various wavelengths or colors, which is how a prism can create a rainbow from sunlight.)

The authors added that more sensitive, next-generation telescopes may have the sensitivity to make more measurements that test the theory of vacuum birefringence. They said future observations should also look for polarization in different wavelengths of light, such as X-rays.