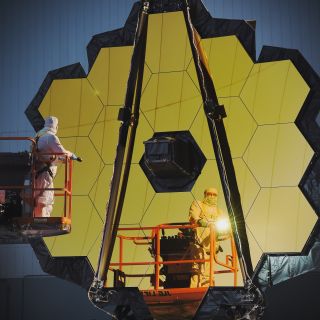 The James Webb Space Telescope is completed and entering a two-year testing phase, NASA officials announced Nov. 2; it is on schedule to launch in October 2018. Here, technicians complete a center of curvature test at Goddard Space Flight Center in Maryland.
(Image: © NASA/Chris Gunn)

NASA Administrator Charles Bolden hosted a news conference to announce the milestone this morning at the agency's Goddard Space Flight Center in Maryland, overlooking the 18 large mirrors that will collect infrared light, sheltered behind a tennis-court-size sun shield. JWST is considered the successor to NASA's iconic Hubble Space Telescope.

"Today, we're celebrating the fact that our telescope is finished, and we're about to prove that it works," said John Mather, an astrophysicist and senior project scientist for the telescope. "We've done two decades of innovation and hard work, and this is the result — we're opening up a whole new territory of astronomy." [How NASA's James Webb Space Telescope Works (Infographic)]

The telescope will be much more powerful than even Hubble for two main reasons, Mather said at the conference. First, it will be the biggest telescope mirror to fly in space. "You can see this beautiful, gold telescope is seven times the collecting area of the Hubble telescope," Mather said. And second, it is designed to collect infrared light, which Hubble is not very sensitive to.

Earth's atmosphere glows in the infrared, so such measurements can't be made from the ground. Hubble emits its own heat, which would obscure infrared readings. JWST will run close to absolute zero in temperature and rest at a point in space called the Lagrange Point 2, which is directly behind Earth from the sun's perspective. That way, Earth can shield the telescope from some of the sun's infrared emission, and the sun shield can protect the telescope from both bodies' heat.

The telescope's infrared view will pierce through obscuring cosmic dust to reveal the universe's first galaxies and spy on newly forming planetary systems. It also will be sensitive enough to analyze the atmospheres of exoplanets that pass in front of their stars, perhaps to search for signs of life, Mather said.

The telescope would be able to see a bumblebee a moon's distance away, he added — both in reflected light and in the body heat the bee emitted. Its mirrors are so smooth that if you stretched the array to the size of the U.S., the hills and valleys of irregularity would be only a few inches high, Mather said.

"Some of you that have followed JWST know that it almost didn't happen, and it's mainly because of the people that are sitting here, able to talk to you today, that we're all here and within two years of launch," Bolden said.

The telescope was originally scheduled to launch in 2014, at a cost of about $5 billion, but a series of setbacks and budget constraints delayed and nearly canceled the project. Now, though, officials affirmed that the telescope is on track and on budget for an October 2018 launch on an Ariane 5 rocket. (As a result of the delays, JWST's cost is now $8.7 billion, Ochs said.) The project is led by NASA but supported by international partners, including the European Space Agency and the Canadian Space Agency.

The telescope's testing at Goddard, which has already begun, will ensure that it can withstand the shaking and loud noise of a rocket launch. Then, it will be moved to Texas, where its focus will be tested, and then to California for some final assembly. The testing is particularly high-stakes, because unlike Hubble, which was repaired and refocused in orbit by astronauts, this telescope is not intended to be repaired by humans.

"It's critically important to get it right here on the ground, and that's the purpose for the tests that we're doing here and, most importantly, for the tests when we get it down to Johnson [Space Center] in Chamber A, the big vacuum chamber," Bolden said.

"[We need to] make sure it can, in fact, be focused, so that we don't find, as we did with Hubble, that we don't have the ability to do what we thought it was going to be able to do," Bolden said, referring to the repairs needed to focus Hubble after launch. Each of JWST's mirrors is individually tunable, he said, so they can be adjusted without a corrective lens like the one astronauts put on Hubble.

"Our lessons learned from the Hubble [telescope incident] were, if you really care about something, you've got to measure it at least twice," Mather added. "And if you don't get the same answer, you'd better figure out why."

Researchers will make observations with the telescope for at least 5 years, and will carry enough fuel for 10 years — if they're lucky, JWST will last even longer, Mather and Bolden said. They added that the craft will absolutely be hit by space debris over the course of its lifespan, and that it's designed to function fine with small holes in its mirrors.

The full telescope, with a 21.3-foot (6.5 meters) mirror assembly, is too large to launch fully extended, so the telescope will be carefully furled during launch and will have to unfold over the course of two weeks once it's in space, Mather said. After that, the sun shield will be extended carefully, and the telescope will be given time to cool down. Finally, it will be focused, they said.

By six months after launch, the telescope will be ready to begin doing science.

Mather alluded to the "7 minutes of terror" of the Curiosity Mars rover's automated landing in 2012 — a famously complicated maneuver that used a rocket-powered sky crane to lower the vehicle to the Martian surface.

"This is six months of terror," he said.