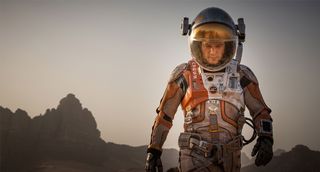 "The Martian" is poised to take home some more awards-season hardware.

The Oscars, formally known as the Academy Awards, are given out by the Academy of Motion Picture Arts and Sciences. The winners will be announced during a live broadcast on Feb. 28.

"The Martian" stars Damon as fictional NASA astronaut Mark Watney, who is stranded and presumed dead on the Red Planet after a powerful windstorm. Watney must use his wits and scientific smarts to stay alive by himself on Mars and find a way to contact NASA, so the agency can mount a rescue mission.

The film opened in theaters throughout the United States on Oct. 2 and came out on DVD, Blu-ray and Digital HD on Tuesday (Jan. 12).

"The Revenant" — like "The Martian," a survival story, but set in the American West in the 1820s — led all films in Oscar nominations, with 12. To see a complete list of all 2015 nominees, check out the Oscars website here: http://oscar.go.com