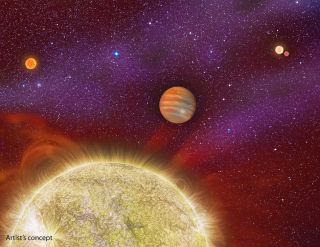 Planets with four suns in their sky may be more common than previously thought, a new study suggests.

Astronomers have spotted a fourth star in a planetary system called 30 Ari, bringing the number of known planet-harboring quadruple-sun systems to two. Numerous two- and three-star exoplanets have been identified.

30 Ari lies 136 light-years from the sun in the constellation Aries. Astronomers discovered a giant planet in the system in 2009; the world is about 10 times more massive than Jupiter and orbits its primary star every 335 days. A second pair of stars lies approximately 1,670 astronomical units (AU) away. (1 AU is the distance between Earth and the sun — about 93 million miles, or 150 million kilometers).

Roberts and his colleagues used the new "Robo-AO" adaptive optics system at the Palomar Observatoryin California to sweep the sky, examining hundreds of stars each evening for signs of multiplicity. This search identified a fourth star in close proximity to 30 Ari's primary star.

The newfound star circles its companion once every 80 years, at a distance of just 22 AU, but it does not appear to affect the exoplanet's orbit despite such proximity. This is a surprising result that will require further observations to understand, researchers said.

To a hypothetical observer cruising through the giant planet's atmosphere, the sky would appear to host one small sun and two bright stars visible in daylight. With a large enough telescope, one of the bright stars could be resolved into a binary pair.

The discovery marks just the second time a planet has been identified in a four-star system. The first four-star planet, PH1b or Kepler-64b, was spotted in 2012 by citizen scientistsusing publicly available data from NASA’s Kepler mission.

Planets with multiple suns have become less of a novelty in recent years, as astronomers have found a number of real worlds that resemble Tatooine, Luke Skywalker's home planet in the Star Warsfilms.

Indeed, binary stars are more commonthan their singleton counterparts. And the new study suggests that more planetary systems with two pairs of binary stars may be discovered down the road.

"About four percent of solar-type stars are in quadruple systems, which is up from previous estimates because observational techniques are steadily improving," co-author Andrei Tokovinin, of the Cerro Tololo Inter-American Observatory in Chile, said in the same statement.

In addition to finding a fourth star around 30 Ari, the team also found a third star in a planetary system previously thought to have only two suns.

This system, known as HD 2638, was already known to host a planet with half the mass of Jupiter rushing around its primary star once every 3.4 days, while a second star lies about 44,000 AU, or 0.7 light-years, away. The newly discovered third star sits just 28 AU from the primary star, and it appears to have influenced the orbit of the gaseous planet, researchers said.

The research was published online this month in the Astronomical Journal.