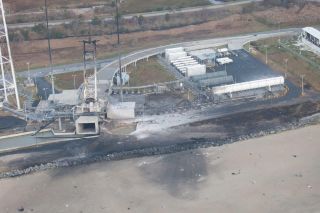 An image of the aftermath of an Antares rocket explosion in Virginia on Oct. 28, 2014. It will take until 2015 to fix the damage, officials have said.
(Image: © NASA)

A privately built robotic cargo spaceship has a new ride to the International Space Station following an October rocket explosion.

The aerospace firm Orbital Sciences holds a $1.9 billion NASA contract to fly robotic supply missions to the space station using the company's Cygnus spacecraft. But since the explosion of one of Orbital's Antares rockets just after launch in late October, those missions have come to a halt. The company now has a contract with United Launch Alliance to launch Cygnus on up to two cargo runs atop ULA's Atlas V rocket in the next two years, representatives announced today (Dec. 9).

Orbital will use the Atlas V to launch at least one Cygnus to the station in late 2015, with another mission possible, if needed, in 2016 while the company changes out the engines used in the first stage of its Antares rocket. Cygnus will be able to carry 35 percent more cargo during its missions on the Atlas V than it was able to with the first version of Antares, Orbital representatives said.

Orbital Sciences was already planning on updating or replacing Antares' AJ26 rocket engines — which are refurbished versions of engines built by the Soviet Union during the 1960s and 1970s — with new first-stage engines when the accident at NASA's Wallops Flight Facility in Virginia occurred. Officials now think a flaw in the AJ26 engine could be to blame for the launch mishap, which caused no injuries but did significant damage to the launch pad.

Representatives with Orbital Sciences also report that they expect to begin launching Cygnus missions to the station with the upgraded Antares in 2016.

"The greater payload performance of the upgraded Antares will permit Cygnus spacecraft on each of these missions to deliver over 20 percent more cargo than in prior plans," Orbital Sciences representatives said in a statement. "With necessary supplier contracts now in place, the first new propulsion systems are expected to arrive at the Antares final assembly facility at Wallops Island, Virginia in mid-2015 to begin vehicle integration and testing."

The Cygnus resupply missions launching atop Atlas V rockets will take flight from Cape Canaveral, Florida, not Virginia, where Antares rockets launched before the Oct. 28 accident. Officials now think that it will take until autumn 2015 for the damage caused by the Antares explosion to be fixed.