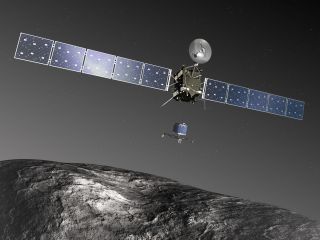 A probe is going to attempt an historic landing on a comet speeding through deep space next week. But Friday (Nov. 7), scientists are going to host a webcast discussing the bold work of soft-landing a spacecraft where none have been before, and you can watch it live online.

The Rosetta mission's Philae lander is expected to make its landing on Comet 67P/Churyumov-Gerasimenko on Nov. 12. Friday's webcast will delve into the specifics of the mission with European Space Agency scientists. The Rosetta webcast is scheduled to begin at 10 a.m. EST (1500 GMT), and you can watch the Rosetta broadcast on Space.com via ESA. Viewers can participate in the webcast by using the hashtag #AskRosetta on Google+ or Twitter.

Philae (named for an obelisk found on an island of the same name in the Nile River) is due to be released from the Rosetta spacecraft at 3:35 a.m. EST (0835 GMT) next Wednesday. Both spacecraft arrived at Comet 67P/C-G in August, and they are currently orbiting about 18.6 miles (30 kilometers) from the comet. While other missions have impacted comets before, if successful, the Philae landing will mark the first time scientists have soft-landed a probe on a comet's surface. [See amazing pictures of the Rosetta mission]

Scientists are hoping to use the instruments aboard Philae and Rosetta to learn more about comets — which are remnants left over from the dawn of the solar system. The data gathered by the space probes might even help researchers trace the origins of water in the solar system. Learn more about the webcast directly through ESA: https://plus.google.com/events/cjeue6sjne4i9so22o27mtcvb4g