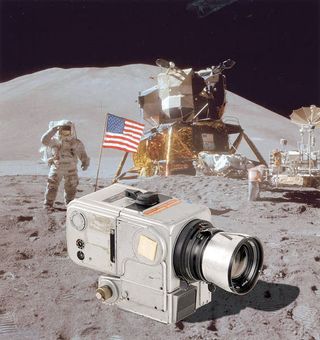 A 70-millimeter Hasselblad EDC camera claimed to be the camera used on the moon by Apollo 15 astronaut James Irwin in 1971 will be auctioned in March by Austria's WestLicht Gallery.
(Image: © WestLicht Gallery)

A camera purported to have been used by the eighth man to walk on the moon while he was exploring the lunar surface in 1971 is now heading for the auction block in Austria, the sale's organizers announced on Thursday (Jan. 30)

A 70-millimeter Hasselblad Electric Data Camera (EDC), described by the WestLicht Gallery in Vienna as having flown to the moon and back on NASA's Apollo 15 mission, is included in the gallery's March 22 auction of vintage and collectible cameras. The lunar-flown Hasseblad is said to have been used by astronaut James Irwin, as identified by the registration number "38" on a small plate found inside the camera.

The number 38 appears on the camera's Reseau plate, a transparent piece of glass used to superimpose calibration crosshairs on the photographs taken with the camera. The "38" also appeared on each of the 299 photos captured by Irwin.

Only camera to return from the moon?

Among the other claims made by the WestLicht Gallery is that the Hasselblad EDC camera for sale is the only lunar-surface-used camera to return to Earth.

To save weight for moon rocks on the journey home, the Apollo moonwalkers were instructed to leave the bodies of the cameras and other spent equipment on the moon. The astronauts were only to pack the film canisters for the trip back to Earth.

But on the second of three moonwalks during the Apollo 15 mission, Irwin reported that his camera — mounted to the chest of his spacesuit — had locked up.

Back inside the lunar module, Irwin and Scott were able to get the camera to start advancing film and so Irwin took it outside with him for the mission's third moonwalk. But it locked up again, which led to the decision to bring it back to Earth for a more thorough inspection.

But was Irwin's camera the only Hasseblad EDC to return from the moon, as claimed by WestLicht?

No, it was not. At least one other, the camera used on the moon by Apollo 14 commander Alan Shepard, also came back to Earth.

"They'd like for you to return your camera, so you don't have to bother removing the magazine from it," Mission Control radioed to Shepard just before he hit a golf ball off the moon's surface on Feb. 6, 1971. "You can just put the whole camera in the ETB [Equipment Transfer Bag]."

Similarly, the space-to-ground transcripts suggest Eugene Cernan, Apollo 17 commander and the last man to walk on the moon, also returned his Hasselblad at the instructions of Mission Control, though where the camera is now is not clear.

From the moon to the marketplace

According to the Westlicht Gallery, the Hasselblad camera will come with "extensive documentation" prepared by its former owner Alain Lazzarini, a Hasselblad collector and the author of the book "Hasselblad and the Moon."

Had Irwin, who died in 1991, brought the camera back to Earth with him as a memento of his mission, then it may have been possible for him — or posthumously his family — to legally claim ownership. In 2012, Congress approved legislation recognizing the Apollo astronauts' title to spent NASA equipment that they held onto as keepsakes.

But the camera was returned for study, not as a souvenir, so it is not clear how the camera entered private hands.

It also appears this is not the first time this same camera has been offered for sale.

Based on additional serial numbers posted on Westlicht's website promoting the upcoming sale, the Hasselblad is a match for the unit sold by RR Auction of New Hampshire in November 2012. In that sale, which ended with a high bid of $42,704, the camera was described as having flown on an Apollo command module to lunar orbit — no claim was made of it having ever landed on the moon or having been used by Irwin.

"I feel certain that this camera flew in the Apollo command service module during one or more lunar flights," asserted NASA's former aerial, instrumentation and motion picture photographer Dick Williamson in a letter included with the camera's 2012 auction.

Click through to collectSPACE.com for more about space artifacts and the Hasselblad EDC camera up for auction.