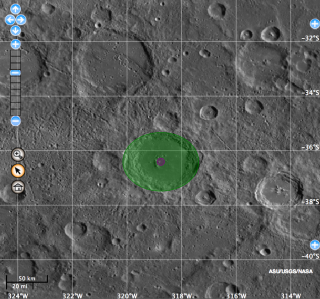 Beatles legend John Lennon, "Breakfast at Tiffany's" author Truman Capote and sculptor Alexander Calder are among the 10 artists and writers now immortalized on Mercury with impact craters bearing their names.

The International Astronomical Union (IAU), the global authority for all planetary and satellite nomenclature, approved the new monikers this week. The names were proposed by the science team for NASA's Messenger spacecraft, which has beamed back hundreds of pictures of Mercury from its orbit around the tiny planet.

According to the IAU's naming rules, craters on Mercury can only be named after creative types, or more specifically, "deceased artists, musicians, painters, and authors who have made outstanding or fundamental contributions to their field and have been recognized as art historically significant figures for more than 50 years." [Latest Photos of Mercury from NASA's Messenger Probe]

The IAU has been arbitrating cosmic names since 1919 and it has strict guidelines for different celestial bodies and planetary features. Pluto's satellites, for example, must be named after mythological deities associated with the underworld (thus, Styx and Kerberos). Moons of Jupiter, meanwhile, are named for Jupiter's lovers and descendants (such as Europa and Io).

Messenger — which stands for MErcury Surface, Space ENvironment, GEochemistry, and Ranging — launched in 2004 and arrived in orbit around Mercury in March 2011. The spacecraft completed its first flyby of our solar system's smallest planet in January 2008, and since then, more than 100 craters on Mercury have been named.

"The Messenger team is delighted that the IAU has named an additional 10 impact craters on Mercury," the mission's principal investigator, Sean Solomon of Columbia University, said in a statement. "We are particularly pleased that eight of the 10 individuals honored made all or many of their artistic contributions in the Twentieth Century, the same century in which the Messenger mission was conceived, proposed, and approved for flight."

Here's the list of all 10 newly named craters, courtesy of the Messenger team: