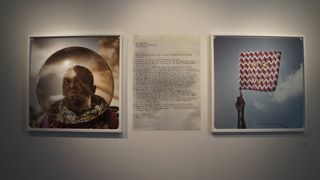 Photographer Cristina De Middel presents "The Afronauts," an exhibition documenting Zambia's little-known attempt to reach space in the 1960's, on view in New York City at the Dillon Gallery from Sept. 5 to Oct. 12, 2013.
(Image: © Miriam Kramer/SPACE.com)

NEW YORK — The short-lived Zambian space program is now reborn thanks to a Spanish artist.

Cristina De Middel's new photography exhibition, called "The Afronauts," explores the space program started in 1964 by a schoolteacher who dreamt of sending Zambians to space at the height of the space race between the Soviet Union and the United States. The exhibit, now on display at the Dillon Gallery in New York City, mixes found artifacts from the time and De Middel's photos inspired by the short-lived space program.

"The beautiful part of it and the part of the story that I really focus on is not what they actually did, because their training was very rudimentary," De Middel told SPACE.com. "I don't know, but I don't think they were really, really serious about going. Everything happened in 1964, that is when Zambia gained independence, and they wanted to show the rest of the world that they were a big country, as big as the ones that were doing the space race at the time." [See photos of 'The Afronauts' exhibition in New York]

The photos used in "The Afronauts" were taken or doctored by De Middel, but a news article and letters at the beginning and end of the exhibit are original, yet reprinted.

"I needed to put some balance in the dreamy aspects of the images and just to play up the different levels of this fact and fiction game I was proposing," De Middel said. "The press article is real. The letters are real — the text is real — I just typed them again in an old typewriter … [I used] these documents that would support the idea of something that is real but unbelievable."

De Middel doesn't have any experience with real spaceflight, so she used her creativity to craft the "spacesuit" worn in her photos. She took quite a bit of inspiration from the popular cartoon, "The Adventures of Tintin," which she watched as a child. De Middel's grandmother also helped the artist sew the suit, which is on display at the gallery.

To partially ground the photo exhibit in reality, De Middel used an original opinion piece written by Edward Makuka Nkoloso — the Zambian teacher who appointed himself the director of the country's space academy — and a letter written about the program.

The letter quoted Nkoloso describing his somewhat unorthodox astronaut training methods, which included rolling the would-be spacefarers downhill in a 40-gallon oil drum to simulate the experience of spaceflight. He also had them swing on a rope, cutting it while the trainees were in midair to help them experience free fall.

Nkoloso's space plans included sending a woman, two cats and a missionary to Mars by the end of the year. "I have warned the missionary he must not force Christianity on the people in Mars if they do not want it," Nkoloso wrote.

Although the idea of sending such a crew to Mars at that time might sound ridiculous now, there is a hopeful quality to De Middel's exhibition.

"Zambians are inferior to no men in science and technology," Nkoloso wrote. "My space plans will surely be carried out."

The big goals of the time clearly influenced Nkoloso, Middel said. "If Zambia [gained] independence now, maybe, instead of doing the space race, which makes no sense, they would just get involved in genetic research or something like that, because that's what the big countries are doing now," De Middel said. "At the time they were doing the space race in order to put themselves on the map."

"The Afronauts" is based on a book of the same name that De Middel released in 2012. The exhibit has traveled the world and has upcoming dates in Amsterdam, Miami and other cities. It will remain at the Dillon Gallery until Saturday (Oct. 12).