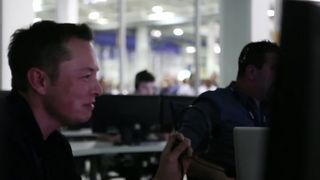 PARIS — SpaceX chairman Elon Musk said the company's Dragon capsule, now used to ferry cargo to the international space station, should be ready to carry astronauts to and from space within two or three years, and that he is more optimistic than ever that a partially reusable rocket will accelerate the reduction in launch costs that SpaceX has already caused with its Falcon 9.

Speaking at the All Things Digital conference in Rancho Palos Verdes, Calif., Musk said his ultimate goal with Hawthorne, Calif.-based Space Exploration Technologies Corp. (SpaceX) has not changed since he founded the company: placing humans on Mars to start a permanent colony there.

For now, Musk said SpaceX's success in building and launching rockets less expensively than established launch service suppliers is "an incremental, not a revolutionary" breakthrough. "Our aspiration is to have a revolutionary breakthrough," he said. [SpaceX's Grasshopper, the Amazing Reusable Rocket (Photos)]

Given that the rocket's constituent materials are such a small part of the total vehicle cost, he said: "Clearly people were doing something silly in how they put those materials together. By eliminating those foolish things, we were able to make a rocket for much less."

Musk said that a rocket's first stage accounts for three-quarters of its total price tag, so a vehicle with a reusable first stage can be produced at far less cost — assuming the hardware is fully and rapidly reusable.

SpaceX is developing a reusable first stage for the Falcon 9 under a program dubbed Grasshopper.

Meanwhile, SpaceX's upgraded, but still expendable, Falcon 9 rocket is scheduled to make its inaugural launch sometime this summer from Vandenberg Air Force Base, Calif., carrying Canada's Cassiope science satellite into low Earth orbit. The launch will flight-qualify the rocket's new engine and fairing sufficiently to trigger a series of Falcon 9 commercial missions that the company has booked.

SpaceX said May 30 that the date of the inaugural flight of the new Falcon 9 remains uncertain. Following a successful Cassiope launch, the new Falcon 9 is scheduled to begin commercial operations from Cape Canaveral Air Force Station, Fla.

After Thaicom, SpaceX has scheduled the launch, this time into low Earth orbit, of the first batch of satellites for Rochelle Park, N.J.-based Orbcomm's machine-to-machine messaging satellite constellation.