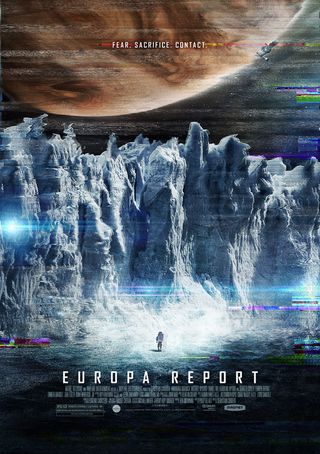 The first trailer for the new science fiction film "Europa Report" has launched onto the Internet and just might be the most realistic — and harrowing — depiction of space travel on the big screen in years.

In "Europa Report," an intrepid crew of astronauts leaves Earth behind for Europa, an icy moon of Jupiter, on a private space mission to seek out alien life. As the first two-minute trailer shows, the mission does not go anywhere near as planned.  Not by a long shot. You can watch the "Europa Report" trailer here.

"This is really a new first step for mankind," one mission official says in the trailer.

In the trailer, we see the Europa-bound crew launch into space, then watch astronauts on spacewalks, and finally see a series of flashes showing what appears to be a space mission going from bad to worse. The anguished scream of a spacesuit-clad astronaut caps the trailer. [See photos from "Europa Report"]

"Europa Report" launches in theaters on Aug. 2 but will be available on iTunes and video on demand on June 27. Filmmaker Sebastián Cordero directed the movie, which stars an ensemble crew that includes Sharlto Copley ("District 9") and Michael Nyqvist ("The Girl With the Dragon Tattoo"). It was produced by Wayfare Entertainment.

"I thought I was trying to do something great for mankind," Copley's character says in the trailer. "I always said it was worth the risk."

To call "Europa Report" just another science fiction thriller does not do the movie justice. (Full Disclosure: SPACE.com has seen the full movie and it is indeed awesome).

The film is by turns moody, suspenseful and stunningly realistic in its portrayal of the extreme isolation astronauts would face on a years-long trip to Jupiter. More than that, though, I'd rather not reveal to avoid spoiling the film.

The views of Europa in the film are amazingly detailed, and the methods used by the crew to probe the moon and its icy crust appear to be pulled straight out of concepts by NASA and other space agencies for exploring the icy Jovian satellite.

Europa has long been a tantalizing target for scientists because its thick icy crust appears to hide a vast ocean of liquid water. Interactions between that ocean and Europa's tidally heated interior could potentially serve as an energy source for primitive life, if it exists at all on the Jupiter moon.

The European Space Agency plans to launch a real-life mission to Europa in 2022 to explore it and several other Jupiter moons as part of the JUpiter ICy moons Explorer (nicknamed JUICE) expedition. NASA will provide a radar instrument for the JUICE spacecraft to peer beneath Europa's surface, but the mission will be completely robotic — no astronauts aboard.

So it looks like Wayfare's "Europa Report" will be the closest humanity comes to a manned mission to Jupiter for the foreseeable future. Let's hope the next try goes a bit better.