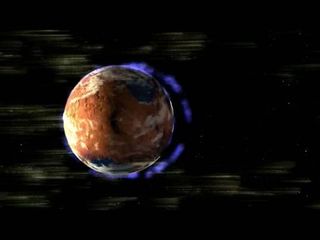 Artist's concept: Disappearance of the ancient magnetic field may have triggered the loss of the Martian atmosphere.
(Image: © NASA)

The planet Mars lost most of its original atmosphere long ago when huge amounts of gas escaped into space, leaving only a wispy remnant behind, scientists say.

NASA's Mars rover Curiosity has revealed that a light variant of the gas argon is relatively depleted in Martian air, bolstering a longstanding belief that the Red Planet's current atmosphere — which is just 1 percent as thick as that of Earth — is a meager shell of its former self.

"We found arguably the clearest and most robust signature of atmospheric loss on Mars," said Sushil Atreya, a SAM co-investigator at the University of Michigan, in a statement.

Curiosity used its Sample Analysis at Mars (SAM) instrument to sniff a sample of Martian air and measured the ratio of two different argon isotopes, which are varieties of an element that have different numbers of neutrons in their atomic nuclei. The instrument found that the lighter argon-36 is about four times as common as the heavier argon-38. [Latest Mars Photos by the Curiosity Rover]

That ratio is significantly lower than the ratio for the solar system at its birth, as estimated from argon-isotope measurements of the sun and Jupiter, researchers said. The new measurement is consistent with the idea that gas escaped from the top of the Martian atmosphere in the distant past, with lighter stuff leaving more easily than heavier atoms and molecules.

The Curiosity rover team reported the new results today (April 8) at the 2013 European Geosciences Union General Assembly in Vienna, where scientists also provided other updates about the rover's recent discoveries.

For example, Curiosity's onboard weather station, known as REMS (for Rover Environmental Monitoring Station) has shown that humidity varies from place to place along the robot's route inside Mars' huge Gale Crater. REMS' observations are the first systematic measurements of humidity on the Martian surface, researchers said.

And Curiosity's laser-shooting Chemistry and Camera instrument, or ChemCam, has given the rover team insights about the coating of dust that gives the Red Planet its distinctive color.

"We knew that Mars is red because of iron oxides in the dust," ChemCam deputy principal Investigator Sylvestre Maurice, of the Research Institute of Astrophysics and Planetology in Toulouse, France, said in a statement. "ChemCam reveals a complex chemical composition of the dust that includes hydrogen, which could be in the form of hydroxyl groups or water molecules."

Curiosity landed inside Gale Crater on the night of Aug. 5, kicking off a two-year surface mission to determine if the area could ever have supported microbial life.

Rover scientists have already achieved this goal, announcing last month that an area called Yellowknife Bay was a wet, habitable environment billions of years ago. The team came to this conclusion after studying analyses Curiosity performed of material drilled from deep within a Yellowknife Bay outcrop in early February.

Researchers want Curiosity to drill another hole in the area, to confirm and build on what the rover has already found. But that won't happen until next month, as the team is sending no new commands to Curiosity for about four weeks, when Mars is passing behind the sun from Earth's perspective.

Our star can disrupt and degrade interplanetary communications in such an alignment, which comes along every 26 months or so and is known as a Mars solar conjunction. Until May 1, Curiosity will do stationary science work with REMS and two other instruments, its Radiation Assessment Detector and the water-hunting Dynamic Albedo of Neutrons, using commands sent up in March, scientists said.

"After conjunction, Curiosity will be drilling into another rock where the rover is now, but that target has not yet been selected. The science team will discuss this over the conjunction period," Curiosity chief scientist John Grotzinger, of Caltech in Pasadena, said in a statement.