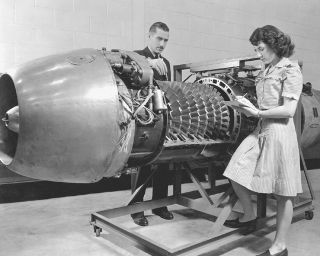 A display of a Junkers Jumo turbojet engine is shown during investigation at the Aircraft Engine Research Laboratory of NACA.
(Image: © Fred Lingelbach.)

In this historical photo from the U.S. space agency,  a JUMO 004 Jet Propelled Engine with cover removed is exhibited on March 24, 1946, for the Inspection by the Institute of Aeronautical Science Group. Design variables and the arrangement of blades on the eight-stage axial flow compressor of a Junkers Jumo, 004, turbojet engine is shown being investigated at the Aircraft Engine Research Laboratory of the National Advisory Committee for Aeronautics, Cleveland, Ohio, now known as John H. Glenn Research Center at Lewis Field.