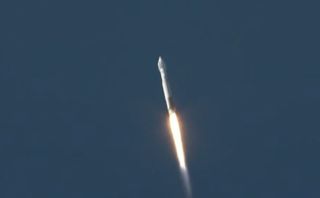 NASA's latest Earth-observation satellite blasted off today (Feb. 11), continuing a storied four-decade effort to track environmental change and resource use across the planet.

The $855 million LDCM spacecraft is the eighth satellite in the history of the Landsat program, a joint NASA/United States Geological Survey (USGS) project that has been monitoring forest loss, glacial retreat, urban sprawl and other phenomena continuously since Landsat 1 lifted off in July 1972. [Photos: The Next Landsat Earth-Observing Spacecraft]

LDCM is the most capable and advanced Landsat spacecraft yet, and its successful launch could extend the program's legacy another decade or so into the future, researchers said.

"LDCM will continue to describe the human impact on Earth and the impact of Earth on humanity, which is vital for accommodating seven billion people on our planet," LDCM project manager Ken Schwer, of NASA's Goddard Space Flight Center in Greenbelt, Md., told reporters Feb. 8 during a prelaunch press briefing.

The SUV-size LDCM satellite will eventually settle into a polar orbit with an altitude of 438 miles (705 kilometers). NASA will conduct key checkouts of the spacecraft over the next three months, after which it will be turned over to the USGS for operations and renamed Landsat 8.

Landsat 8 will peer down at Earth with two sensitive instruments. The Operational Land Imager (OLI) will collect data in visible, near infrared and shortwave infrared wavelengths, while the Thermal Infrared Sensor (TIRS) will measure surface temperatures around the planet.

Like its predecessors, Landsat 8 will acquire images with a spatial resolution of 98 feet (30 meters). It will send about 400 pictures per day to ground stations in South Dakota, Alaska and Norway.

By tracking urban expansion, natural resource use, global ice loss and other phenomena, Landsat 8 will help scientists and policymakers better understand how the growing human population is affecting the planet, researchers said.

"The Landsat data will allow us to understand why many natural land change processes are occurring, and what those changes and processes mean for life on land and in coastal areas," said mission program executive David Jarrett, of NASA Headquarters in Washington, D.C. "LDCM's land cover observations are critical in maintaining our ability to monitor and understand global change."

The last Landsat spacecraft to launch before today was Landsat 7, which blasted off in April 1999. Landsat 7 is the only other satellite in the program that's currently operational. (Landsat 5 recently retired after more than 28 years of service.)

Landsat orbits allow full global coverage every 16 days, but the teamwork of Landsat 7 and Landsat 8 will bring that down to a complete view of the planet every eight days, researchers said.

The partnership between the two satellites could last for several years, since Landsat 7 has enough fuel to stay in an operational orbit through 2016.

For its part, Landsat 8 has enough fuel for about a decade of operations, researchers said. The Landsat 8 spacecraft and the OLI instrument have design lives of five years, and TIRS was built to last at least three years.

"We hope that the spacecraft and the instruments will last well beyond their design lives, and we can continue to collect data for at least 10 years," said mission project scientist Jim Irons, of NASA Goddard.