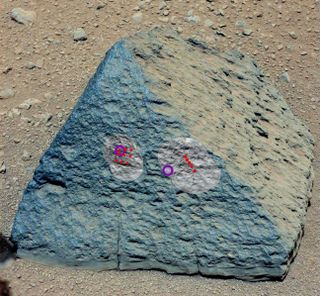 This image shows where NASA's Curiosity rover aimed two different instruments to study a rock known as "Jake Matijevic" in late September 2012. The red dots indicate where Curiosity fired its laser at the rock. The circular black and white images are ChemCam images to examine the laser burns. Purple circles show spots where Curiosity used its Alpha Particle X-ray Spectrometer to study the rock.
(Image: © NASA/JPL-Caltech/MSSS)

A rock on Mars being studied by NASA's Curiosity rover is unlike any Martian stone ever seen, and is surprisingly similar to an unusual, but well-known, kind of rock on Earth.

This type of rock is the first of its kind encountered on Mars and is helping broaden scientists' understanding of how igneous rocks form, scientists said today (Oct. 11). The rock, named "Jake Matijevic" in honor of a Curiosity mission team member who died in August, is a 16-inch-tall (40-centimeter) pyramid-shape specimen that Curiosity encountered at its landing spot in Mars' Gale Crater.

Curiosity, the centerpiece of the $2.5 billion Mars Science Laboratory Mission, touched down on the Red Planet Aug. 5 to learn whether Mars ever had the conditions necessary to support life.

The Jake rock is being used as a calibration target for Curiosity to try out its suite of 10 science instruments on. "It was the first good-size rock that we found along the way," Roger Wiens, principal investigator for Curiosity's Chemistry and Camera (ChemCam) instrument at the Los Alamos National Laboratory, said today (Oct. 11) during a press conference. [Amazing Mars Rover Curiosity Views (Latest Photos)]

In late September Curiosity used ChemCam and its Alpha Particle X-ray Spectrometer (APXS) to probe Jake's chemical composition. What they found was surprising.

"The spectrum that we're seeing was not what I expected," said APXS principal investigator Ralf Gellert of Canada's University of Guelph. "It seems to be a new type of rock that we've discovered on Mars" that wasn't seen by NASA's previous Mars rovers Spirit and Opportunity.

While previously unknown on Mars, this type of chemical composition is seen in a rare but well-studied class of rocks on Earth. On Earth, such specimens are found on oceanic islands such as Hawaii and in other places. They are thought to form when interior rocks melt to form magma, which then rises toward the surface. As it rises, it cools, and parts of the material crystalize, preferentially selecting some elements while leaving a remainder of liquid magma that is enriched with the left-behind chemicals.

However, the researchers said it's too soon to know whether the Jake rock formed this same way.

"This is based on one rock and one has to be careful not to extrapolate," said Edward Stolper, provost of Caltech and co-investigator on Curiosity's science team. "You have to wait and see if we find others and if relationships among them give us clues into the processes."

Ultimately, this rock is deepening scientists' understanding of the types of geology present on Mars, and could reveal new formation processes for known types of rocks.

"There is a richness in the igneous story that's not surprising," Stolper told SPACE.com. "The more you look, the more you find different things happened."

Curiosity is about 65 days into its mission, and still testing out all of its equipment.

The rover used its scoop tool to dig up Martian dirt for the first time earlier this week, and scientists saw a strange shiny object in photos of the scooped material. The find put a temporary halt on scooping activities while mission managers investigated the object.

Scientists have since concluded that it is most likely a bit of plastic from the rover itself or its landing mechanism that fell off onto the ground during its entry, descent and landing (EDL) process.

"The main thing here is we scoured the rover and it's completely inconsequential to the rover's function," said Chris Roumeliotis, lead turret rover planner for Curiosity at NASA's Jet Propulsion Lab in Pasadena, Calif., where Curiosity's mission control is based. "It's likely from EDL and there is absolutely no issue."

Mission team members will continue investigating the debris, but they think it might be a piece of resistive heating material from the rover's exterior that was attached with adhesive, which might have come unstuck.