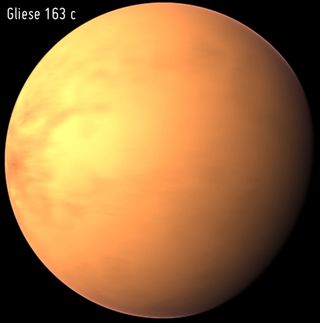 Artist's rendition of the "super Earth" Gliese 163c, which may be capable of supporting microbial life.
(Image: © PHL @ UPR Arecibo)

A newly discovered alien planet may be one of the top contenders to support life beyond Earth, researchers say.

The newfound world, a "super Earth" called Gliese 163c, lies at the edge of its star's habitable zone — that just-right range of distances where liquid water could exist.

"There are a wide range of structures and compositions that allow Gliese 163c to be a habitable planet," Xavier Bonfils, of France's Joseph Fourier University-Grenoble, told SPACE.com by email.

He went on to caution that several possible uninhabitable combinations exist as well. [The Top 5 Potentially Habitable Alien Planets]

Gliese 163c was one of two alien planets found orbiting the star Gliese 163, which lies about 50 light-years from Earth in the Dorado constellation The team found indications of a third planet as well but cannot confirm it at this time.

Weighing in at about seven times the mass of Earth, Gliese 163c could be a rocky planet, or it could be a dwarfed gas giant, researchers said.

"We do not know for sure that it is a terrestrial planet," Bonfils said. "Planets of that mass regime can be terrestrial, ocean, or Neptune-like planets."

Orbiting at the inner edge of the habitable zone, Gliese 163c takes 26 days to zip around its parent star, which is considerably dimmer than our sun. The second planet, Gliese 163b, has an orbital period of only nine days, while the third unconfirmed planet circles from a distance.

Bonfils pointed out that there is about a 2 percent chance that Gliese 163c might pass between its star and the sun from Earth's perspective. If so, scientists may be able to glean more information about the distant planet by watching it cross the face of its host star.

The research has been submitted for review and publication.

A good candidate for life

The Planetary Habitability Laboratory (PHL) at the University of Puerto Rico at Arecibo keeps a catalog of the alien worlds it considers good candidates to host life. The newly discovered Gliese 163c ranks fifth on the list.

"We are finding more potentially habitable planets now than before," PHL's Abel Mendez, who was not part of the Gliese 163c discovery team, told SPACE.com by email..

"Most of these are relatively close, so we can expect to find better and closer ones as our technological sensitivity to Earth-size planets improves," Mendez said.

To rank habitable planets, Mendez and his colleagues at PHL compare them with the only planet known to host life. They rank the worlds according to how similarly their masses, diameters and temperatures match up with those of Earth.

Temperatures of alien planets are tough for researchers to estimate. Temperature is heavily influenced by atmospheric characteristics, and scientists don't know much about most exoplanets' atmospheres.

Mendez suggested that one scenario for Gliese 163c might include a balmy ocean with an atmosphere 10 times as dense as Earth's. The global ocean might slosh beneath a pink, cloud-covered sky. At around 140 degrees Fahrenheit (60 degrees Celsius), the temperature would be too hot for prolonged human exposure or complex plants or animals, but some microbes could tolerate it.

But it's also possible that Gliese 163c is too hot for even those hardy lifeforms to exist.

In the meantime, Bonfils and his team intend to use HARPS to continue their search for planets that could be ripe for life, hoping to find one that may allow astronomers to study it today rather than tomorrow.

"Although it is nice to build the sample of possibly habitable planets that will be observed with the next generation of telescopes, it would be even better if we could find a planet one could characterize with today's observatories," Bonfils said.