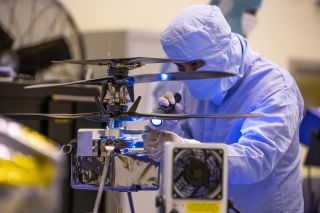 NASA's next mission to Mars will carry what is meant to become the first aircraft to fly on another planet, and that experimental helicopter just spun its blades on Earth for the last time.

The Mars Helicopter is scheduled to launch in July with the new Mars rover, now dubbed Perseverance, as an add-on project to the primary Mars 2020 mission. NASA is still striving to meet that launch date despite continuing closures enacted to slow the spread of the serious respiratory disease COVID-19 caused by a new coronavirus.

All the components of the Mars 2020 mission are currently undergoing their final prelaunch tests at NASA's Kennedy Space Center in Florida. Among those components are the cruise stage vehicle, which recently finished a test to confirm its mass properties, NASA said in a statement, and the helicopter.

The recent tests on the helicopter included spinning its blades for the last time before launch, during which it reached 50 rotations per minute in the testing airlock, according to the statement. If all goes well, the blades will next spin on Mars sometime in 2021, after the mission touches down in February.

Meeting the summer launch window for Mars 2020 is one of NASA's highest priorities even as much of the agency's centers have closed to on-site work in an attempt to slow the spread of the new coronavirus. Because of the tricky alignment of Mars and Earth, if the agency misses the launch window this summer, it will need to wait two years before it can try again. A Mars mission shared by the European Space Agency and Russia has already met that fate.