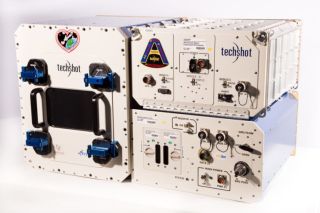 A new 3D printer will launch to the space station in July with the goal of manufacturing human tissue in space.
(Image: © Techshot Inc.)

A new 3D printer aims to create human tissue in space after it launches to the International Space Station aboard a SpaceX cargo mission this month.

The printer, formally called the 3D BioFabrication Facility (BFF), aims to use adult human cells and adult tissue-derived proteins (or chains of amino acids) as source material for viable tissue. It's a first small step to eventually creating human organs — such as hearts or lungs — using 3D printers, spaceflight equipment operator Techshot said in a statement.

"The initial phase for BFF, which could last about two years, will involve creating test prints of cardiac-like tissue of increasing thickness," said Techshot, which is collaborating on the project with nScrypt, a 3D bioprinter and electronic printer manufacturer.

Techshot added that the next planned phase of BFF would last through about 2024. This would involve manufacturing heart patches in space, then evaluating their performance on Earth in small animals, such as rats.

"Ultimately, long-term success of BFF could lead to reducing the current shortage of donor organs and eliminate the requirement that someone must first die in order for another person to receive a new heart, other organ or tissue," Techshot said.

While creating human tissue in space is an expensive proposition, there are advantages to doing the work in microgravity instead of under Earth's gravitational pull. Tissues made on Earth tend to collapse under their own weight, Techshot said, "resulting in little more than a puddle."

In microgravity, however, the 3D-printed structures will remain stable and strong, according to the company. These space-printed tissues could then be placed in a cell-culturing system to get stronger and withstand the pull of Earth's gravity.

The CEO of nScrypt, Ken Church, has a personal desire to see BFF succeed, because his daughter was born 24 years ago with a single lung. While she remains healthy and active today, Church said in the Techshot statement, he remembers wishing doctors could make her a second lung.

"Assembling a human lung or other organ is still years away, but it is no longer science fiction," Church said. "BFF is the roadmap for getting there, and this BFF team knows how to follow that map. I have no doubt someday BFF will provide someone like my daughter with a second lung."